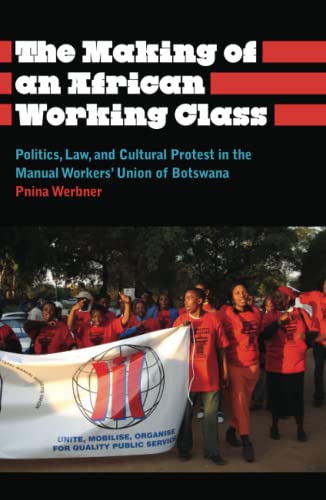 The Making of an African Working Class
by Pnina Werbner

The Making of an African Working Class Summary

The Making of an African Working Class: Politics, Law, and Cultural Protest in the Manual Workers' Union of Botswana by Pnina Werbner

It is now 50 years since E.P. Thompson published his classic, The Making of the English Working Class. The Making of an African Working Class follows Thompson in exploring the formation of working class identity among low-paid African workers. In arguing for a radical public anthropology of worker identity, the book seeks to analyse the cultural, legal, ideological and experiential dimensions of labour activism often neglected in other labour studies.

Pnina Werbner shows that by fusing cosmopolitan and local popular cultural forms of protest, unionists have created a distinctive, vernacular way of being a worker in Botswana: one that does not deny workers' roots at home or in the countryside, while being cognisant of a wider world of cosmopolitan labour rights. The assertion of working class dignity, honour and respect, Pnina argues, is a powerful motivating force for manual workers.

Against legal-sceptical approaches, The Making of an African Working Class argues that in challenging the government - their employer - in court, manual workers' protests and mobilisation are deeply embedded in ethics, social justice and the law.

The Making of an African Working Class Reviews

'Shows how dignity, justice and morality underlay the resurgence of the Manual Workers' Union. A formidable achievement'

'[A] masterful ethnography ... Werbner has produced a theoretically sophisticated and thoroughly researched account of the uneven rise ofworking-class consciousness and activism in Botswana'

Pnina Werbner is Professor Emerita of Social Anthropology, Keele University. She is the author of The Making of an African Working Class (Pluto, 2014), The Manchester Migration Trilogy - The Migration Process (2002), Imagined Diasporas (2002) and Pilgrims of Love (2003).

List of Figures
List of Abbreviations
Series Preface
Preface
1. Introduction
2. A Labour Elite? Strategising Women and the Spectre of Unemployment
3. Women, Leadership and the Dignity of Labour
4. Lekgotla la Babereki, the Court of the Workers: The Trade Union as Public Forum
5. 'Legitimate Expectations': Ethics, Law and Labour Justice in the 1991 Strike
6. The Politics of Infiltration: Factionalism and Party Politics
7. This Land Is Our Land: The 2005 Manual Workers' Union Grand Tour of Botswana
8. Solidarity Forever: Mobilising the Trade Union Movement in Prayer and Protest
9. Winning against the Odds: Speaking Truth to Power and Dilemmas of Charismatic Leadership
10. 'The Mother of All Strikes': Popular Protest Culture and Vernacular Cosmopolitanism in the Public Service Unions' Strike, 2011
11. The Political and Moral Economy of the 2011 Strike: Public Rhetoric, Conflict and Policy
12. Legal Mobilisation, Legal Scepticism and the Politics of Public Sector Unions
13. Concluding Remarks: Class Identity, Dignity and the Agency of Labour in Botswana
Appendix
Notes
References
Index

GOR010518778
The Making of an African Working Class: Politics, Law, and Cultural Protest in the Manual Workers' Union of Botswana by Pnina Werbner
Pnina Werbner
Anthropology, Culture and Society
Used - Like New
Paperback
Pluto Press
2014-07-10
320
0745334954
9780745334950
N/A
Book picture is for illustrative purposes only, actual binding, cover or edition may vary.
The book has been read, but looks new. The book cover has no visible wear, and the dust jacket is included if applicable. No missing or damaged pages, no tears, possible very minimal creasing, no underlining or highlighting of text, and no writing in the margins.