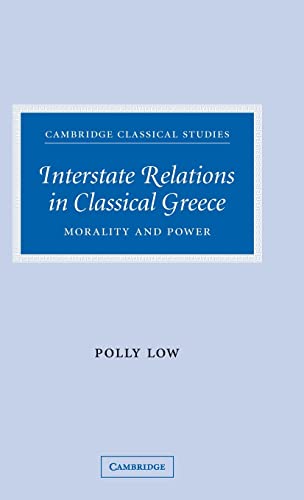 In Stock
$65.99
inc. GST
This book explores the assumptions and principles which determined the conduct and representation of interstate politics in Greece during the fifth and fourth centuries BC. A wide range of ancient evidence is employed, both epigraphic and literary, as well as some contemporary theoretical approaches to international politics.
Very Good
Only 1 left

In this book Dr Low explores the assumptions and principles which determined the conduct and representation of interstate politics in Greece during the fifth and fourth centuries BC. She employs a wide range of ancient evidence, both epigraphic and literary, as well as some contemporary theoretical approaches from the field of International Relations. Taking a thematic rather than a chronological approach, she addresses topics such as the nature of interstate society in the Greek world; the sources, scope and enforcement of 'international law'; the nature of interstate ethics and morality; interventionism and imperialism; and the question of change and stability. She argues that classical Greece's reputation for unrestrained and unsophisticated diplomacy is undeserved, and shows that relations between Greek city-states were shaped by and judged according to a complex network of customs, beliefs and expectations which pervaded all areas of interstate behaviour.

Review of the hardback: 'Polly Low's theoretically-informed study of interstate relations in ancient Greece is ... a welcome addition to an emerging dialogue between ancient historians and political scientists.' Scholia Reviews
"Low's book achieves some considerable success in challenging the narrow focus on Thucydides alone." -Sheila L. Ager, New England Classical Journal
"Interstate Relations in Classical Greece tackles an important topic and offers a genuinely new perspective on some longstanding problems...L[ow] offers a subtle analysis of Greek international law and practice, and succeeds in her aim to move the debate beyond the most visible structures of interstate interaction to elucidate the norms and beliefs by which Greek international life was conducted." -Sian Lewis, University of St Andrews, Bryn Mawr Classical Review
"Not since the publication of Frank Adcock and D. J. Mosley's Diplomacy in Ancient Greece (1975) has an English-language book attempted to survey the international relations of classical Greece. Polly Low's book is a significant advance over Adcock and Mosley, her analysis deeper and more thought-provoking." -Sarah Bolmarcich, University of Texas at Austin, The International History Review

About Polly Low (University of Manchester)

POLLY LOW is Lecturer in Ancient History at the University of Manchester.

GOR009699983
Interstate Relations in Classical Greece: Morality and Power by Polly Low (University of Manchester)
Polly Low (University of Manchester)
Cambridge Classical Studies
Used - Very Good
Hardback
Cambridge University Press
2007-05-03
324
0521872065
9780521872065
N/A
Book picture is for illustrative purposes only, actual binding, cover or edition may vary.
This is a used book - there is no escaping the fact it has been read by someone else and it will show signs of wear and previous use. Overall we expect it to be in very good condition, but if you are not entirely satisfied please get in touch with us.