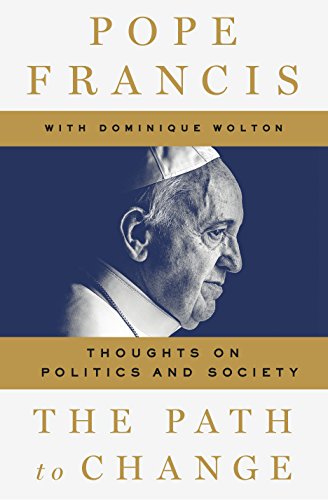 The Path to Change
by Pope Francis

Used Price
$18.49
inc. GST
Free Shipping in Australia
A fascinating insight into Jorge Mario Bergoglio's life before he was elected Pope, and how his experiences have shaped his vision for the future of the Catholic Church.
Reviews:
Trustpilot
Very Good

The Path to Change Summary

The Path to Change: Thoughts on Politics and Society by Pope Francis

Pope Francis has thoroughly re-engaged the Catholic Church with the modern world, by tackling the difficult and urgent questions that we face as a civilization, in order to illuminate the path to change. French sociologist Dominique Wolton interviewed Pope Francis regularly over the course of a year, and their open, warm dialogue builds a detailed picture of how Pope Francis became the most popular leader the Catholic Church has ever seen.

The Pope's clarity, humility and humanity are brought to the fore by Dominique Wolton's engaging and relevant questions. As well as revealing fascinating insights into his early life, in The Path to Change Pope Francis freely addresses the major issues of our time: peace and war, politics and religion, globalization and cultural diversity, fundamentalism and secularism, Europe and migrants, ecology, family, time, trust and joy.

Customer Reviews - The Path to Change

The Path to Change Reviews

Jorge Mario Bergoglio, Archbishop of Buenos Aires, was elected Pope under the name of Francis on March 11, 2013. He is the first Jesuit and Latin American Pope in the history of the Church.

Dominique Wolton is a sociologist and research director at the French National Centre for Scientific Research. He is the founder and director of the international journal Hermes and is the author of thirty books, translated into twenty languages.

GOR009868954
The Path to Change: Thoughts on Politics and Society by Pope Francis
Pope Francis
Used - Very Good
Paperback
Pan Macmillan
2018-08-09
336
152900229X
9781529002294
N/A
Book picture is for illustrative purposes only, actual binding, cover or edition may vary.
This is a used book - there is no escaping the fact it has been read by someone else and it will show signs of wear and previous use. Overall we expect it to be in very good condition, but if you are not entirely satisfied please get in touch with us.