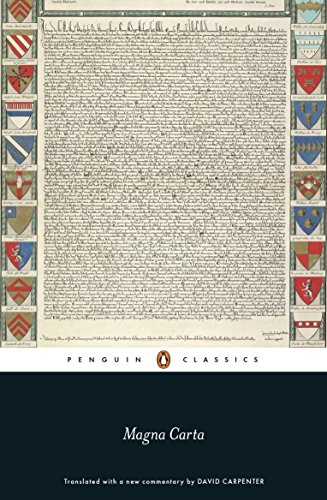 Out of Stock
$28.49
inc. GST
Magna Carta, forced on King John in 1215 by rebellion, is one of the famous documents in world history. It asserts a fundamental principle: that ruler is subject to the law. This book draws on discoveries to give an account of Magna Carta's origins, survival and enforcement, showing how it quickly gained a central place in English political life.
Very Good
Only 0 left

'David Carpenter deserves to replace Sir James Holt as the standard authority, and an unfailingly readable one too.' Ferdinand Mount, TLS

With a new commentary by David Carpenter

"No free man shall be seized or imprisoned, or stripped of his rights or possessions, or outlawed or exiled, or deprived of his standing in any other way, nor will we proceed with force against him, or send others to do so, except by the lawful judgment of his equals or by the law of the land."

Magna Carta, forced on King John in 1215 by rebellion, is one of the most famous documents in world history. It asserts a fundamental principle: that the ruler is subject to the law. Alongside a new text and translation of the Charter, David Carpenter's commentary draws on new discoveries to give an entirely fresh account of Magna Carta's text, origins, survival and enforcement, showing how it quickly gained a central place in English political life. It also uses Magna Carta as a lens through which to view thirteenth-century society, focusing on women and peasants as well as barons and knights. The book is a landmark in Magna Carta studies.

2015 is the 800th anniversary of Magna Carta's creation - an event which will be marked with exhibitions, commemorations and debates in all the countries over whose constitutions and legal assumptions the shadow of Magna Carta hangs.

Lively and detailed, Carpenter's elucidations confirm the commonly held view of King John ("mockery...cruelty...arrogance...fearful suspicions"), while probing the background to Runnymede. From June 1215, Magna Carta "asserted the rule of law" and laid the basis for the tax-based parliamentary state. Yet it also buttressed existing hierarchy - not good news for women or unfree peasants -- Christopher Hirst * The Independent *
Of all the books that commemorated the octingentenary of the signing of Magna Carta, the one that stands out for me is David Carpenter's new Penguin Classics edition. Not only does Carpenter vividly re-create the vicious civil war that precipitated the intense drama at Runnymede, he reminds us of the equally vicious civil war that followed, leading to the extraordinary invitation from the rebel barons to Prince Louis of France to replace John on the throne. No less important, Carpenter settles the Great Charter into the social and economic life of a growing nation in which the feudal structures were beginning to erode and a country of free citizens was soon to emerge. David Carpenter deserves to replace Sir James Holt as the standard authority, and an unfailingly readable one too. -- Ferdinand Mount * TLS *

David Carpenter is Professor of Medieval History at King's College, London and a foremost authority on the Magna Carta period. He is the author of The Struggle for Mastery in Britain, 1066-1284, a volume in the Penguin History of Britain series.

GOR006393758
Magna Carta by Prof David Carpenter
Prof David Carpenter
Used - Very Good
Paperback
Penguin Books Ltd
2015-01-01
624
0241953375
9780241953372
N/A
Book picture is for illustrative purposes only, actual binding, cover or edition may vary.
This is a used book - there is no escaping the fact it has been read by someone else and it will show signs of wear and previous use. Overall we expect it to be in very good condition, but if you are not entirely satisfied please get in touch with us.