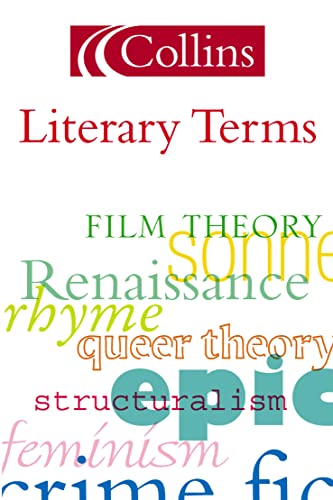 In a clear, succinct, nontechnical language, this new dictionary of more than 1000 literary terms and themes takes an expanded view of the term `literary'. It is the first book of its kind to give students and general readers not only a traditional literary vocabulary but also the knowledge of related theoretical, historical, and cultural terms they need in the interdisciplinary world of contemporary literary studies. Entries reflect literature as it is taught and experienced today, with increasingly flexible boundaries between high and popular culture, canonical and non-canonical literature, literary and nonliterary vocabulary.

* Essays on major themes in literature.

* Terms from film, television, psychology, history, and other fields that touch peripherally on literature

From American reviews of the hardback:

"...this valuable resource is more accessible and broader in approach than other literary dictionaries." - School Library Journal

GOR002152828
Literary Terms (Collins Dictionary of) by Prof. Edward Quinn
Prof. Edward Quinn
Collins Dictionary of
Used - Very Good
Paperback
HarperCollins Publishers
2004-02-02
384
0007165552
9780007165551
N/A
Book picture is for illustrative purposes only, actual binding, cover or edition may vary.
This is a used book - there is no escaping the fact it has been read by someone else and it will show signs of wear and previous use. Overall we expect it to be in very good condition, but if you are not entirely satisfied please get in touch with us.