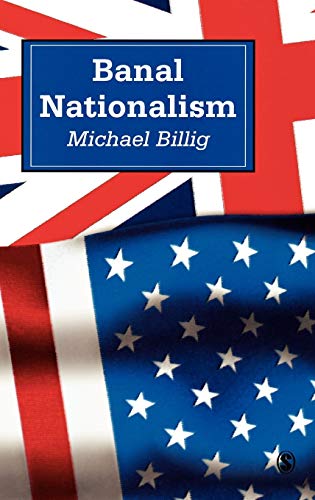 Out of Stock
$209.99
inc. GST
The author of this study turns his attention to the everyday, less visible forms of nationalism that are deeply ingrained in contemporary consciousness. This form of nationalism, which is neither exotic nor remote, he describes as "banal nationalism".
Very Good
Only 0 left

Michael Billig presents a major challenge to orthodox conceptions of nationalism in this elegantly written book. While traditional theorizing has tended to the focus on extreme expressions of nationalism, the author turns his attention to the everyday, less visible forms which are neither exotic or remote, he describes as `banal nationalism'.

The author asks why people do not forget their national identity. He suggests that in daily life nationalism is constantly flagged in the media through routine symbols and habits of language. Banal Nationalism is critical of orthodox theories in sociology, politics and social psychology for ignoring this core feature of national identity. Michael Billig argues forcefully that with nationalism continuing to be a major ideological force in the contemporary world, it is all the more important to recognize those signs of nationalism which are so familiar that they are easily overlooked.

`[The book] has definitely made an original contribution to the understanding of nationalism by introducing the concept of what Billig calls "banal nationalism".... Billig has written a well-documented and provocative book in which he challenges a commonly neglected aspect of nationalism: its crucial role as an ideology related not only to the foundation of the nation-state but also to its daily reproduction. Billig makes us aware of the multiple ways in which banal nationalism can be expressed and in so doing he certainly contributes to the understanding of such a potent and complex phenomenon' - Nations and Nationalisms

`Billig has produced a book which all students of nationalism should ponder, especially those whose own nationalism is so unmindfully ingrained in their minds that they can recognize the phenomenon only as a form of exaggerated and unreasonable behaviour in others. Billig's discussion provides a useful survey of much of the modern literature on nationalism, from Renan to Ignatieff.... Billig succeeds admirably in his main aim of illuminating the fashion in which nationalism is kept in vigorous health by the endless reproduction of its assumptions, values and symbols "in a banally mundane way", which incorporates it into routine consciousness so effectively that its pervasiveness goes unremarked, as with the Stars and Stripes on the filling station forecourt which the traveller sees but does not notice' - Patterns of Prejudice

`An excellent study.... A book to be recommended, it requires close reading, preferably more than once' - Political Studies

`An analysis for the 1990s, opening with a detailed account of media coverage in the Gulf War. In countries like Britain and the United States, we may think of nationalism as a problem for "them", meaning people in faraway places. But according to Billig, "our" nationalism is omnipresent. It can surface at moments such as the conflicts with Galtieri or Saddam only because it is so pervasive, reinforced in countless idle moments by limp flags outside post offices, or by the way the media present the weather forecast. Billig thinks that if we are to understand "hot", "surplus" expressions of nationalism in the contemporary world, then it behoves us to pay careful attention to the apparently benign, banal "flaggings" of nationalism in "the daily dexis" of our homelands.... Billig is right to point out that there is nothing natural about the way most of us nowadays have mental maps of the world's population divided up into linguistic and cultural groups that we call nations. He criticizes "common sense sociology" for its equation of society with nation, and chides social psychologists for approaching national identity as just another type of group identity, without probing further into its history and distinctive features. He also chastises some so-called postmodernist and globalization theorists, who have exaggerated the extent to which nations and states have already been superseded as the major sources of culture and identity. For all this he deserves credit' - Times Literary Supplement

'This book is thought provoking, accessible and well constructed, offering an alternative way of examining everyday situations and questioning much that is taken for granted about nations and national identity' - International Social Science Review

`Billig has drawn on a breathtaking array on popular and academic sources to bring new insight into the vexing problem of nationalism in the late twentieth century. Writing in the clear and provocative style that has come to characterize his work, he explores a range of complex issues in a surprisingly accessible way. Indeed, Billig manages to accomplish two major tasks in this volume. First, he provides a conceptual framework that allows us to see forms and forces of nationalism that have hertofore eluded us. Second, he continues his critique of standard social science and demonstrates how it can be reformulated to address processes that shape, and sometimes threaten our lives. One cannot help but be full of admiration for Billig's accomplishment' - James V Wertsch, Washington University, St Louis

`Michael Billig's Banal Nationalism is a fine essay on taken-for-granted forms of nationalism in everyday life, such as national pride and saluting the flag. He explores the bases of such sentiments, and shows their centrality to a sociological understanding of nationalism. This book is anything but banal' - Martin Bulmer, University of Surrey

`Billig's main thesis is that nationalism as an ideological force is not as well understood as it should be because social scientists have largely ignored such familiar displays of national identity as flag waving and saluting. Without accounting adequately for `banal' behaviour, scholars have often failed to recognize inconsistencies and internal contradictions in a state's manipulation of national symbols, and even in the use of the term `nationalism', a phenomenon usually attributed to others rather than one's own nation. The author's arguments are cogent and elaborate, and his prose elegant....He has given us a platform for understanding the meaning of nationalism in everyday life, a remarkable accomplishment.... The book is so well crafted and yields so many intriguing insights - on such matters as the distinction etween nationalism and patriotism, the inherent ideological trappings of nationalism, the inability of social identity theory to account for `banal' identity, and very many more - that it merits attention from all serious scholars of nationalism' - Nationalism and Ethnic Politics

Professor Michael Billig is professor of social sciences at the University of Loughborough. His most recent books are Ideology and Opinions: Studies in Rhetorical Sociology (SAGE, 1991) and Talking of the Royal Family (1992). Michael Billig has been Professor of Social Sciences at Loughborough University, UK, since 1985. He took his undergraduate degree at Bristol University, where he also completed his Ph.D. in experimental social psychology, under the supervision of Henri Tajfel. Michael considers Tajfel to have have been one of the most important figures in the history of social psychology. After leaving Bristol to take up a lectureship at Birmingham University, Michael turned away from experimental social psychology, which he found to be too intellectually and methodologically restricting. In his work, Michael has attempted to approach social psychological issues from a broader base within the social sciences. He has written books on a variety of topics. His books for SAGE include Banal Nationalism, in which he argued that in established nation-states there is an everyday, often unnoticed form of nationalism. Ideological Dilemmas, written in collaboration with other members of the Loughborough Discourse and Rhetoric Group, suggested that we should study ideology by examining how people argue and use language in everyday life. SAGE also published his book The Hidden Roots of Critical Psychology, which argues that the neglected figure of the third earl of Shaftesbury should be seen as a pivotal influence in the history of psychology, especially in the history of critical psychology. Michael has also written books on rhetoric, fascism, Freud's theory of repression, attitudes towards the British Royal Family and the history of rock'n'roll. His current work argues forcefully that academic social scientists use too much technical terminology and that ordinary concepts are often much clearer than technical ones.

GOR010220210
Banal Nationalism by Prof. Michael Billig
Prof. Michael Billig
Used - Very Good
Hardback
SAGE Publications Ltd
1995-08-22
208
0803975244
9780803975248
N/A
Book picture is for illustrative purposes only, actual binding, cover or edition may vary.
This is a used book - there is no escaping the fact it has been read by someone else and it will show signs of wear and previous use. Overall we expect it to be in very good condition, but if you are not entirely satisfied please get in touch with us.