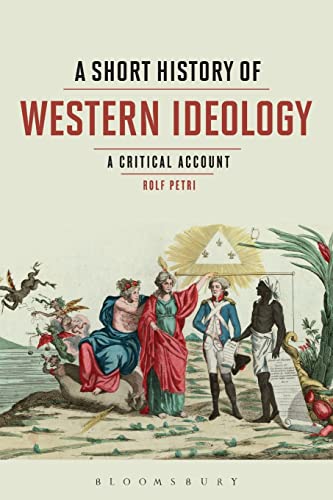 We are arguably living in a 'postideological' era. However, when we tune into the TV news we can hear political leaders talk about 'advanced' societies, geopolitical experts suggest 'humanitarian' interventions, and sober events presenters qualify a murder as 'barbaric'. What does this mean? In this comprehensive book, Rolf Petri reveals how our everyday political language is full of ideological representations of the world, and places them in an accessible historical narration. From the secularization of Europe and the Enlightenment project of 'civilization' to the contemporary preoccupation with ecological catastrophes or the end of history, A Short History of Western Ideology carves out the central elements of western ideology. It focuses on a wide variety of issues including religion, colonialism, race and gender, which are essential for how we conceive of the modern world. By creating an awareness of the ideological character of the western worldview, its limits and its flaws, this book warns us of the dangers that derive from a self-righteous mindset. It is stimulating and important reading for history and politics students seeking to understand the ideology of the western world.
In a lengthy and highly sophisticated introduction, Petri (Ca' Foscari Univ. Italy) justifies the kind of intellectual history he is doing. In conceptual history, the author ranges freely among great philosophers, their epigones, and historical events to tell a story. * CHOICE *
In this fascinating and important book Rolf Petri has created a concise history of Western ideology, each of the chapters a brilliant essay on its own terms, coming together to form a major historical statement that sums up what it has meant to think Western over the course of the last three centuries. This book compels us to rethink the most fundamental aspects of how we understand the role of ideology in the making of the modern world. * Larry Wolff, Professor of History, New York University, USA *
A brilliant account of core elements of Western ideology, explaining how they emerged from eschatological thinking to inform our modern experience of the world. Instead of running his readers through a schematic list of authors and their thought, Petri takes a holistic approach, looking at the presumptions they share. It is a tour de force which leads us from Herodotus to the Abrahamic religions, from Enlightenment and colonisation to global warming. * Axel Koerner, Professor of Modern History, University College London, UK *
What might western ideology mean after decades of postcolonial criticism and deconstruction? What's left of Eurocentrism and Westernness? Rolf Petri dives deep into this immense cultural tradition, scrutinizing it with intellectual devices that localize it in a concrete geographical and historical context and, at the same time, delocalize it, viewing it within a non-hierarchical global context. Present-day preoccupations with civic bonds and the environment, temporality and making sense of history set the stage for rediscovering, rereading (and reshaping) the western intellectual tradition. * Antonis Liakos, Professor Emeritus of History, University of Athens, Greece *
Petri's discussion of the nature and history of western ideology discusses the writings of philosophers and historians from Locke to Hobbes, and from Adam Smith to Marx and Engels. In the process, the reader is exposed to a critical and often innovative interpretation of these writers' works; their commonalities and their differences. * Counterpunch *
Rolf Petri is Professor of Contemporary History at Ca' Foscari University of Venice, Italy.
Acknowledgements Introduction 1. Europe and History 2. Freedom and Sovereignty 3. Hierarchy among Equals 4. A Craving for Goodness 5. Ecology and Apocalypse Afterword References Index
NGR9781350026100
9781350026100
1350026107
A Short History of Western Ideology: A Critical Account by Prof. Rolf Petri (Ca' Foscari University of Venice, Italy)
Prof. Rolf Petri (Ca' Foscari University of Venice, Italy)
New
Paperback
Bloomsbury Publishing PLC
20180222
256
null null null null null null null null null null
Book picture is for illustrative purposes only, actual binding, cover or edition may vary.
This is a new book - be the first to read this copy. With untouched pages and a perfect binding, your brand new copy is ready to be opened for the first time
Trustpilot