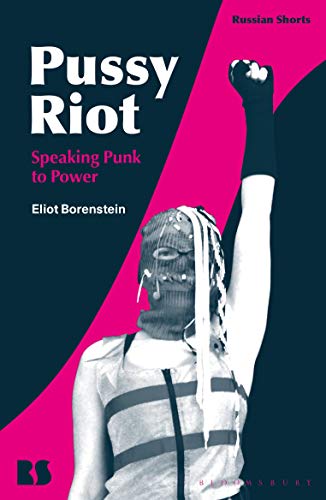 Both more and less than a band, Pussy Riot is continually misunderstood by the Western media. This book sets the record straight. After their scandalous performance of an anti-Putin protest song in Moscow's Cathedral of Christ the Savior and the imprisonment of two of its members, the punk feminist art collective known as Pussy Riot became an international phenomenon. But, what, exactly, is Pussy Riot, and what are they trying to achieve? The award-winning author Eliot Borenstein explores the movement's explosive history and takes you beyond the hype.
Eliot Borenstein takes readers trough the fascinating discussion triggered by the Pussy Riot in and after their famous 'punk prayer'. Does contemporary protest have to be spectacular? What happens when protesters become celebrities? How feminist Pussy Riot eventually are? And what lessons can we learn from 'speaking punk to power'? A must read for everyone interested in art and politics. * Ivan Gololobov, Lecturer in Politics and Russian Studies, University of Bath, UK *
Eliot Borenstein succinctly explains what made Pussy Riot a global phenomenon. He uncovers the complex context of the affair which builds off the interplay between political protest, prank and parody, language taboos, post-modernist art activism, performance, dissidence, punk, the subversive politics of the female body, religion, and church. * Elena Gapova Professor of Sociology, Western Michigan University, USA *
Borenstein shows the need to understand Pussy Riot not just as activists, but transgressive actionists, who played with meaning, context, and syntax to say no to the Putin regime's authoritarian performance. Unmasking the layers of meaning, the book takes the analysis through their improvisational, multivocal, and sometimes problematic transformation and ends with its own radical claim that Masha and Nadya continue to speak punk to power. * Janet Elise Johnson, Professor of Political Science, Brooklyn College CUNY, USA *
Unlike other accounts that have tried to unmask Pussy Riot, Eliot Borenstein sets a radically different agenda. Comfortable with the complexities and inconsistencies of the Pussy Riot phenomenon, he evaluates what it takes to fight the oppressive political regime in Russia. Borenstein's unique blend of wit, compassion and critical analysis makes this a highly engaging and enjoyable read. * Marina Yusupova, Postdoctoral Researcher, Newcastle University, UK *
Eliot Borenstein is Professor of Russian & Slavic Studies, Collegiate Professor in the Faculty of Arts and Sciences, and Senior Academic Convenor for the Global Network at New York University, USA. His first book, Men without Women: Masculinity and Revolution in Russian Fiction, 1917-1919, won the AATSEEL award for best work in literary scholarship in 2000. In 2007, he published Overkill: Sex and Violence in Contemporary Russian Popular Culture, which received the AWSS award for best book in Slavic Gender Studies in 2008. His latest book, Plots against Russia: Conspiracy and Fantasy after Socialism, came out in 2009. Borenstein was also the recipient of a Guggenheim Fellowship in 2009.
List of Images Introduction: Foolish Inconsistency 1. Penis Riot: Pussy Riot's Pre-Feminist Roots 2. Inciting a Pussy Riot 3. When is a Church not a Church? 4. Like a (Punk) Prayer 5. Hurting Believers' Feelings 6. Pussy Riot and Political Speech 7. Performance vs. Archive 8. Feminism and Other Dirty Words 9. Anonymity and Glamour: Does the Camera Love Pussy Riot? Conclusion
NGR9781350113534
9781350113534
1350113530
Pussy Riot: Speaking Punk to Power by Professor Eliot Borenstein (New York University, USA)
Professor Eliot Borenstein (New York University, USA)
Russian Shorts
New
Paperback
Bloomsbury Publishing PLC
2020-11-12
152
N/A
Book picture is for illustrative purposes only, actual binding, cover or edition may vary.
This is a new book - be the first to read this copy. With untouched pages and a perfect binding, your brand new copy is ready to be opened for the first time
Trustpilot