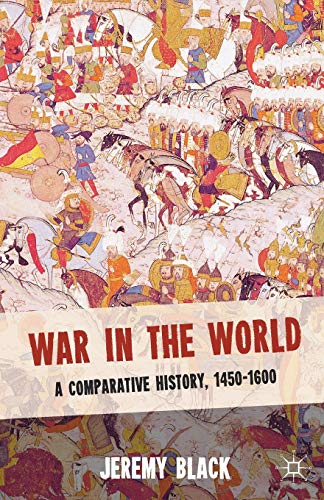 War in the World
by Professor Jeremy Black

In Stock
$14.49
+10% GST
War was a central theme in the world history of the late fifteenth and sixteenth centuries, with military capability and activity central to its states, societies, economies and cultures.
Very Good
Only 1 left

War in the World Summary

War in the World: A Comparative History, 1450-1600 by Professor Jeremy Black

War was a central theme in the world history of the late fifteenth and sixteenth centuries, with military capability and activity central to its states, societies, economies and cultures. War in the World 1450-1600 provides an account of warfare in the period, placing it in global context. It offers a corrective to a narrative that has emphasised European developments and obscured the history of non-European military systems and cultures of war.

Highlighting conflict between non-Western powers, which constituted most of the conflict around the world, as well as giving due attention to warfare between Western and non-Western powers, Black emphasises the breadth and variety of military trajectories and connections. This comparative context also provides a framework for considering the idea of a European-based Military Revolution. A wide-ranging account of world military history in a period of substantial development, the book will be essential reading for those interested in global history and conflict.

War in the World 1450-1600 is designed as a companion volume to Jeremy Black's Beyond the Military Revolution: Warfare in the Seventeenth-Century World.

War in the World Reviews

'An impressive display of comparative history, coherent and well written, and convincingly argued. It is very likely to be considered a milestone development in the time to come.' - John Thornton, Professor of History, Boston University, USA '..an interesting overview which points up many avenues for possible detailed study.' -The Bulletin of the Military Historical Society

JEREMY BLACK is Professor of History at the University of Exeter, UK. He is a leading authority on early modern British and continental European history, with special interest in international relations, military history, the press, and historical atlases. His recent publications include The English Seaborne Empire, The Age of Total War, Using History, Naval Power and Beyond the Military Revolution.

GOR009709799
War in the World: A Comparative History, 1450-1600 by Professor Jeremy Black
Professor Jeremy Black
Used - Very Good
Paperback
Macmillan Education UK
2011-09-28
264
0230298591
9780230298590
N/A
Book picture is for illustrative purposes only, actual binding, cover or edition may vary.
This is a used book - there is no escaping the fact it has been read by someone else and it will show signs of wear and previous use. Overall we expect it to be in very good condition, but if you are not entirely satisfied please get in touch with us.