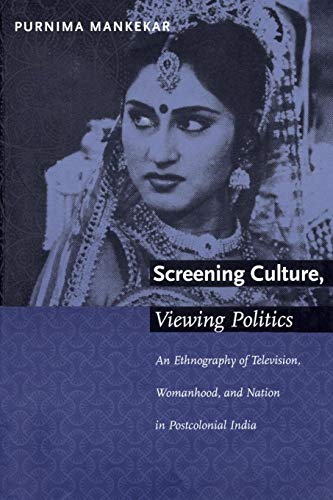 In Stock
$52.99
inc. GST
With a focus on the responses of upwardly-mobile, yet lower-to-middle class urban women to state-sponsored entertainment serials, this title demonstrates how television in India has profoundly shaped women's place in the family, community, and nation, and the crucial role it has played in the realignment of class, caste, religion, and politics.
Very Good
Only 1 left

In Screening Culture, Viewing Politics Purnima Mankekar presents a cutting-edge ethnography of television-viewing in India. With a focus on the responses of upwardly-mobile, yet lower-to-middle class urban women to state-sponsored entertainment serials, Mankekar demonstrates how television in India has profoundly shaped women's place in the family, community, and nation, and the crucial role it has played in the realignment of class, caste, consumption, religion, and politics.
Mankekar examines both "entertainment" narratives and advertisements designed to convey particular ideas about the nation. Organizing her study around the recurring themes in these shows-Indian womanhood, family, community, constructions of historical memory, development, integration, and sometimes violence-Mankekar dissects both the messages televised and her New Delhi subjects' perceptions of and reactions to these messages. In the process, her ethnographic analysis reveals the texture of these women's daily lives, social relationships, and everyday practices. Throughout her study, Mankekar remains attentive to the tumultuous historical and political context in the midst of which these programs' integrationalist messages are transmitted, to the cultural diversity of the viewership, and to her own role as ethnographer. In an enlightening epilogue she describes the effect of satellite television and transnational programming to India in the 1990s.
Through its ethnographic and theoretical richness, Screening Culture, Viewing Politics forces a reexamination of the relationship between mass media, social life, and identity and nation formation in non-Western contexts. As such, it represents a major contribution to a number of fields, including media and communication studies, feminist studies, anthropology, South Asian studies, and cultural studies.

"An outstanding work by a brilliant and passionate scholar. Screening Culture, Viewing Politics is a rare jewel. Not only does Mankekar explore a key historical moment in India's history, but she brings a vibrant feminist political critique to her understanding of the construction of the modern Indian state. This book will become a classic."-Ann Gray, University of Birmingham
"In India, where nothing stands still, least of all, tradition, it is remarkable how the unwavering eye of Purnima Mankekar has studied the ceaseless working and reworking of the gendered anxieties of a nationalized, post-colonial, febrile middle under the flickering light of Doordharshan-India's state run television. Screening Culture, Viewing Politics is a must for anyone interested in culture in the broadest and most fecund sense of that term."-E. Valentine Daniel, author of Charred Lullabies: Chapters in an Anthropography of Violence
"Purnima Mankekar has crafted a compelling and richly informed account of one of the most difficult of anthropological topics: the power of television to turn local and gendered intimacies into-literally-gripping allegories of national identity. Fusing scholarship and elegance in an exceptionally accessible narrative, she attends to audiences as well as texts. In this way, she provides an exemplary demonstration of how superb ethnography can best disentangle the actual complexities behind the usual cant about modernity, nationalism, and the media."-Michael Herzfeld, author of Portrait of a Greek Imagination

Purnima Mankekar is Associate Professor of Cultural and Social Anthropology at Stanford University.

GOR008360732
Screening Culture, Viewing Politics: An Ethnography of Television, Womanhood, and Nation in Postcolonial India by Purnima Mankekar
Purnima Mankekar
Used - Very Good
Paperback
Duke University Press
1999-11-01
448
0822323907
9780822323907
N/A
Book picture is for illustrative purposes only, actual binding, cover or edition may vary.
This is a used book - there is no escaping the fact it has been read by someone else and it will show signs of wear and previous use. Overall we expect it to be in very good condition, but if you are not entirely satisfied please get in touch with us.