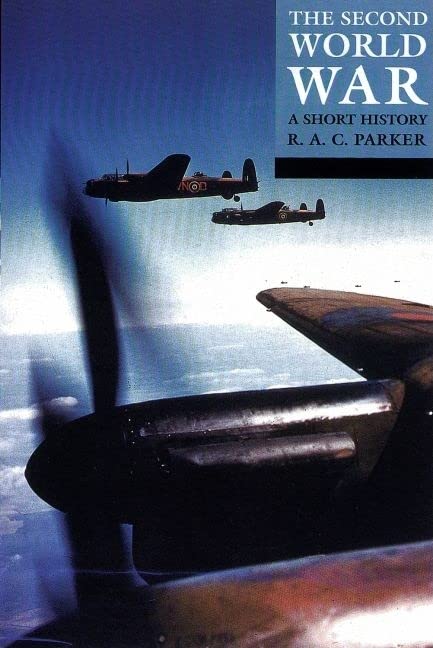 The Second World War
by R. A. C. Parker

In Stock
$12.99
+10% GST
This is a compact but comprehensive and absorbing history of the Second World War. It examines the causes of the war, how it was won and lost, and its far-reaching consequences for humanity.
Good
Only 1 left

The Second World War: A Short History by R. A. C. Parker

The Second World War is a compact but comprehensive and absorbing history of the war. It examines the causes of the war, how it was won and lost, and its far-reaching consequences for humanity. In tracing the key events of both the European and the Far Eastern wars, R. A. C. Parker outlines clearly the strategies of the participants, the economies and societies that underlay them, and the strengths and weaknesses of their fighting forces. He describes the decisive battles and analyses the reasons for their outcome, paying close attention to special features of the war: mobile warfare, forced migration, the Holocaust, strategic and nuclear bombing. Unlike many other histories of the war this book places British and European involvement squarely in an international perspective, and the author never shies away from raising fundamental questions.

Review from previous edition Based on a matchless knowledge of the documents, he provides an authoritative treatment of military, diplomatic, and economic aspects, written with great force and insight. As a one-volume survey, it is unlikely to be surpassed... a magnificent achievement, a tour de force. * Kenneth O. Morgan, New Statesman and Society *
a miracle of compression compared with the rest of the horde of general histories. * Guardian *
Parker alights unerringly on the salient campaigns and issues, and considers them with consistent style and insight. * Times Educational Supplement *
The most balanced view of the causes and courses of the Second World War. * Field Marshal Lord Carver, Times Literary Supplement *
written in clear and elegant English ... a masterful account of the Second World War in all its different spheres. It is scrupulously fair, illuminated by an engaging sense of humour ... and gives an entirely balanced view of the varying contributions of the different powers engaged. * Richard Cobb, The Spectator *
Faced with volume after volume of books about the Second World War, R.A.C. Parker's Short History comes as a breath of fresh air ... it is refreshing to read such a modest-sized yet absorbing history of the years between 1939 and 1945 and what happened before and afer. A Short History is both concise and absorbing - an "introduction" to anyone wanting to know more about the war and an example of how a taut history book can be captivating. * Madeleine Burton, Herts Adverstiser (St Albans Edition) *

R.A.C. Parker is a Fellow of Queen's College, Oxford.

Preface ; Contents ; List of Plates ; List of Maps ; 1. Hitler, Germany, and the origins of the European war ; 2. German conquest of Poland, Norway, the Low Countries, and France ; 3. Britain alone ; 4. Operation BARBAROSSA: the German attack on the Soviet Union ; 5. The United States enters the war: the origins of the Japanese attack ; 6. Japanese victories and disappointments: December 1941 to August 1942 ; 7. The end of German expansion: the Atlantic, North Africa, and Russia, 1942-1943 ; 8. Anglo-American strategies for victory ; 9. Economies at war ; 10. Strategic bombing ; 11. Morale ; 12. Driving back the Germans: North Africa, Italy, and Russia ; 13. D-Day and victory in Europe ; 14. The defeat of Japan and the atom bomb ; 15. From war to peace: Anglo-American relations ; 16. From alliance to Cold War: the Soviet Union and the West ; 17. The impact of war: the murder of the European Jews ; 18. The impact of war: casualties, crisis, and change ; Note on quotations ; Book list ; Index

GOR001969574
The Second World War: A Short History by R. A. C. Parker
R. A. C. Parker
Used - Good
Paperback
Oxford University Press
2001-09-27
352
0192802070
9780192802071
N/A
Book picture is for illustrative purposes only, actual binding, cover or edition may vary.
This is a used book - there is no escaping the fact it has been read by someone else and it will show signs of wear and previous use. Overall we expect it to be in very good condition, but if you are not entirely satisfied please get in touch with us.