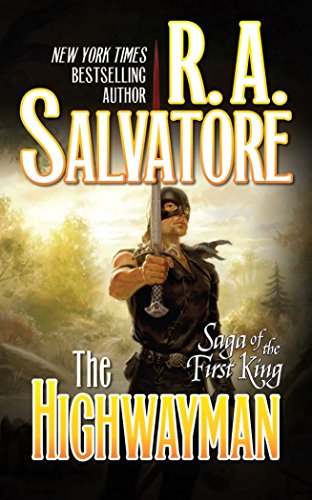 The Highwayman
by R. A. Salvatore

In Stock
$11.99
+10% GST
Best-selling author R. A. Salvatore takes us back to his fantasy world of Corona, introducing a fascinating new hero destined to become a legend
Very Good Good
Only 2 left

The Highwayman by R. A. Salvatore

Long ago, in a distant land, a lonely young man struggles to discover who he is and where he belongs. He carries the blood and magic of two peoples, a sword of unimaginable power, and a staggering potential for great good . . . or greater evil.

In the land of Corona, the roads are unsafe to travel, as goblins and bloodthirsty Powries seek out human prey; and, in this savage world, princes feast while peasants starve, and two religions battle for control.

A monk, Bran Dynard, returns from his mission in a far-off land with two prizes: a book of mystical knowledge and a new wife, the beautiful and mystical Sen Wi. But the world he left behind has changed, and Bran must now decide who he can trust, and where he should place his faith . . .

"[Salvatore] thrusts his avenger into a story pleasingly plump with action, adventure, danger, and, most admirably, great tenderness." --SF Site on "The Highwayman
"
"Vast fun....ninja and samurai fans will get a chuckle recognizing the source of some plot elements." --"Booklist "on" The Highwayman"
"[A] swift-moving tale of sword and sorcery....Fans of Salvatore's unadorned approach and broad caricatures of archetypal figures should be pleased with this carnival of treachery and medieval feudalism." --"Publishers Weekly "on "The Highwayman"
"The ultimate dashing warrior." --"Philadelphia Weekly Press & University City Review" on" The Highwayman"

About R. A. Salvatore

R. A. Salvatore is a New York Times bestselling author. His books have been translated into numerous foreign languages including German, Italian, Finnish, Greek, Hungarian, Turkish, Croatian, Bulgarian, Yiddish, Spanish, Russian, Polish, Czech, and French and he consistently appears on The New York Times best sellers list selling in excess of 10 million copies of his multi-volume series including The Dark Elf Trilogy, Paths of Darkness, The HunterA's Blades Trilogy, and The Cleric Quintet. Still a resident of Massachusetts, Salvatore lives there with his wife Diane, and their three children.

GOR001999886
The Highwayman by R. A. Salvatore
R. A. Salvatore
Used - Very Good
Paperback
Pan Macmillan
2009-06-05
416
0330461656
9780330461658
N/A
Book picture is for illustrative purposes only, actual binding, cover or edition may vary.
This is a used book - there is no escaping the fact it has been read by someone else and it will show signs of wear and previous use. Overall we expect it to be in very good condition, but if you are not entirely satisfied please get in touch with us.