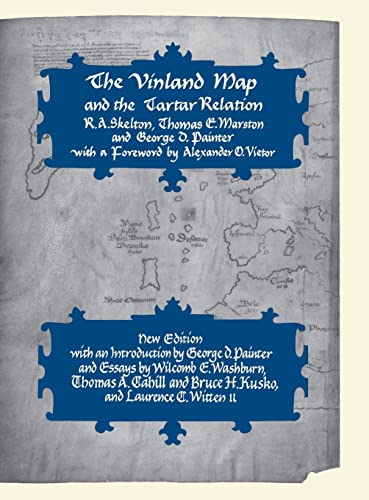 Vinland Map and the Tartar Relation
by R. A. Skelton

Out of Stock
$36.99
inc. GST
The Vinland Map, dated to about 1440 AD, is a map of the world that shows an outline of the northeast American coast. This work reprints unaltered the text on the Vinland Map. It includes essays discussing the verification of the map's authenticity and its compositional and structural aspects.
Well Read
Only 0 left

Vinland Map and the Tartar Relation: New Edition by R. A. Skelton

The Vinland Map, dated to about A.D. 1440-at least fifty years before Columbus landed in the Americas-is a unique map of the world that shows an outline of the northeast American coast and a legend describing its discovery in about 1000 by Leif Eiriksson, the Norseman from Greenland. The map was published by Yale University Press in 1965 and generated an enormous amount of debate. Chemical analysis of the ink later suggested the map might be a forgery, but recent appraisals of both scientific and humanist evidence argue that it is indeed authentic.

Now, on the thirtieth anniversary of its original publication, here is this classic of historical cartography in a new edition. It reprints unaltered the original text on the Vinland Map and an account of Friar John of Plano Carpini's mission to the Mongols from 1245 to 1247, with which the map had at some stage been bound. To this have been added a new introduction by George D. Painter, sole survivor of the original team of editors, who discusses the verification of the map's authenticity; a new essay by Wilcomb E. Washburn, director of the Smithsonian's American Studies Program, on the map's provenance and the tests that have been performed on it; and a new discussion of the map's compositional and structural aspects by Thomas A. Cahill and Bruce H. Kusko, of the Crocker Historical and Archaeological Projects at the University of California, Davis. There is also an account by Laurence C. Witten II, the rare-book dealer who sold the map to the benefactor who donated it anonymously to the Yale University Library.

About R. A. Skelton

The late R. A. Skelton was superintendent of the Map Room of the British Museum. The late Thomas E. Marston was curator of medieval and renaissance literature at the Yale University Library. George D. Painter is assistant keeper emeritus of printed books at the British Museum and the author of Marcel
Proust: A Biography
.

GOR010402067
Vinland Map and the Tartar Relation: New Edition by R. A. Skelton
R. A. Skelton
Used - Well Read
Hardback
Yale University Press
1996-03-04
402
0300065205
9780300065206
N/A
Book picture is for illustrative purposes only, actual binding, cover or edition may vary.
This is a used book. We do our best to provide good quality books for you to read, but there is no escaping the fact that it has been owned and read by someone else previously. Therefore it will show signs of wear and may be an ex library book.