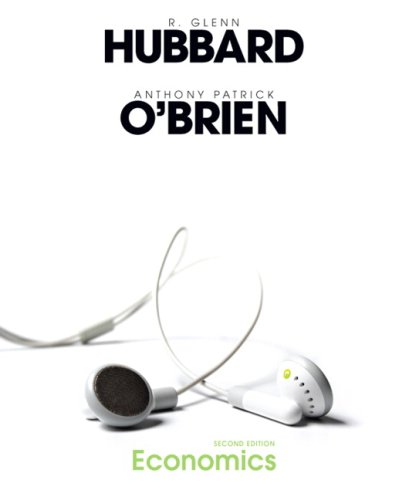 In Stock
$105,99
inc. GST
This guide motivates students to learn economics through real business examples. Whether students open an art studio, do social work, trade on Wall Street, work for the government, or bartend at the local pub, students will benefit from understanding the economic forces behind their work.
Very Good
Only 1 left

Hubbard & O'Brien is the only book that motivates students to learn economics through real business examples.

The #1 question students of economics ask themselves is: "Why am I here, and will I ever use this"? Hubbard & O'Brien answer this question by demonstrating that real businesses use economics to make real decisions daily. This is motivating to all students, whether they are business majors or not. All students can relate to businesses they encounter in their everyday lives. Whether they open an art studio, do social work, trade on Wall Street, work for the government, or bartend at the local pub, students will benefit from understanding the economic forces behind their work.

R.Glenn Hubbard is the Dean and Russell L. Carson Professor of Finance and Economics in the Graduate School of Business at Columbia University and Professor of Economics in Columbia's Faculty of Arts and Sciences. He is also a research associate of the National Bureau of Economic Research and a director of Automatic Data Processing, Black Rock Closed-End Funds, Dex Media, Duke Realty, KKR Financial Corporation, and Ripplewood Holdings. He received his Ph.D. in economics from Harvard University in 1983. From 2001-2003, he served as Chairman of the White House Council of Economic Advisers, and from 1991-1993, he was Deputy Assistant Secretary of the U.S. Treasury Department. Glenn Hubbard's fields of specialization are public economics, financial markets and institutions, corporate finance, macroeconomics, industrial organization, and public policy. He is the author of more than 90 articles in leading journals, including the American Economic Review, Journal of Finance, Journal of Financial Economics, Journal of Political Economy, Journal of Public Economics, Quarterly Journal of Economics, RAND Journal of Economics, and Review of Economics and Statistics. His research has been supported by grants from the National Science Foundation, the National Bureau of Economic Research, and numerous private foundations.

Anthony Patrick O'Brien is a professor of economics at Lehigh University. He received his Ph.D. from the University of California, Berkeley, in 1987. He has taught principles of economics for more than 15 years, in both large sections and small honors classes. He received the Lehigh University Award for Distinguished Teaching. He was formerly the director of the Diamond Center for Economic Education and was named a Dana Foundation Faculty Fellow and Lehigh Class of 1961 Professor of Economics. He has been a visiting professor at the University of California, Santa Barbara, and the Graduate School of Industrial Administration at Carnegie Mellon University. Anthony O'Brien's research has dealt with such issues as the evolution of the U.S. automobile industry, the sources of U.S. economic competitiveness, the development of U.S. trade policy, the causes of the Great Depression, and the causes of black-white income differences. His research has been published in leading journals, including the American Economic Review, the Quarterly Journal of Economics, the Journal of Money, Credit, and Banking, Industrial Relations, and the Journal of Economic History. His research has been supported by grants from government agencies and private foundations. In addition to teaching and writing, Anthony O'Brien also serves on the editorial board of the Journal of Socio-economics.

Chapter 3: Where Prices Come From: The Interaction of Demand & Supply

Chapter 6: Elasticity: The Responsiveness of Demand and Supply

Chapter 8: Comparative Advantage and the Gains from International Trade

Part 6: Markets for Factors of Production

Chapter 16: The Markets for Labor and Other Factors of Production

Part 7: Information, Taxes, and the Distribution of Income

Chapter 17: The Economics of Information

Chapter 18: Public Choice, Taxes, and the Distribution of Income

Appendix: The Algebra of Macroeconomic Equilibrium

Chapter 29: Macroeconomics in an Open Economy

GOR009566073
Economics: United States Edition by R. Glenn Hubbard
R. Glenn Hubbard
Used - Very Good
Hardback
Pearson Education (US)
2007-11-06
1168
013600332X
9780136003328
N/A
Book picture is for illustrative purposes only, actual binding, cover or edition may vary.
This is a used book - there is no escaping the fact it has been read by someone else and it will show signs of wear and previous use. Overall we expect it to be in very good condition, but if you are not entirely satisfied please get in touch with us.