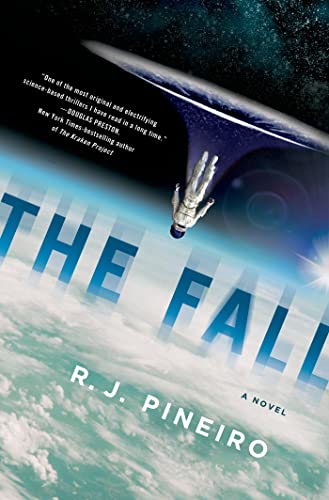 The Fall
by R.J. Pineiro

Used Price
$46.99
inc. GST
Free Shipping in Australia
Jack Taylor has always been an adrenaline junkie. He does dangerous jobs for the government that fall out of the realm of the SEALS and the Marines. The Fall will keep readers on the edges of their seats, waiting to find out what crazy stunt Jack will perform next and to learn the fate of this charming, daredevil hero.
Reviews:
Trustpilot
Very Good

The Fall by R.J. Pineiro

Jack Taylor has always been an adrenaline junkie. As a federal contractor, he does dangerous jobs for the government that fall out of the realm of the SEALS and the Marines and this next job is right up his alley. Jack has been assigned to test an orbital jump and if it works, the United States government will have a new strategy against enemy countries. Despite Jack's soaring career, his personal life is in shambles. He and his wife Angela are both workaholics and are on the verge of getting a divorce. But the night before his jump, Jack and Angela begin to rekindle their romance. Then comes the day of Jack's big jump. He doesn't burn up like some predicted, instead he hits the speed of sound and disappears. Jack wakes up in an alternate universe. One where he died during a mission five years earlier and where Angela is still madly in love with him. But in this world, his boss, Pete, has turned to the dark side, is working against him, and the government is now on his tail. Jack must return to his own world but the only way for him to do that is to perform another orbital jump. This time is more difficult though, no one wants to see him go. Jack's adrenaline is contagious, The Fall will keep readers on the edges of their seats, waiting to find out what crazy stunt Jack will perform next and to learn the fate of this charming, daredevil hero.

"It's a thrill-a-minute story, with good here-and-now technology, and a striking scientific premise at its heart." --Wall Street Journal

"R.J. Pineiro breaks the sound barrier with The Fall, one of the most original and electrifying science-based thrillers I have read in a long time. The opening chapter--the incredible "fall" itself--is mind-bending enough, but it only gets better, with cutting-edge science, vivid characters, and a plot that accelerates to a mind-warping climax. Highly recommended." --Douglas Preston, New York Times bestselling author of The Kraken Project

"This alternate world sci-fi thriller is packed with high stakes and moves at a high speed." --Kirkus

"Packed with mystery, intrigue, physics, fight scenes, and a bit of romance - this story felt like a cross between a Lee Child thriller and hard science fiction." --Science Fiction Book Club

"Just about as well-executed an adventure-sci fi story as 2015 has seen so far, a first-rate thriller delivered by a seasoned pro. Last year had Andy Weir's The Martian; this year's clear torch-bearer is Pineiro's The Fall." --Open Letters Monthly

"Pineiro's tale toggles between the two worlds, each filled with cliffhanger thrills. But the best is saved for last - when Jack, carried by a weather balloon, evades missile fire from an F-22 Raptor and an Arleigh Burke-class destroyer to make a second daredevil drop wearing jury-rigged equipment. The reader, feeling the G-forces, is rendered breathless." --The Star Telegram

"If you're afraid of heights, you probably won't enjoy this novel. But for everyone else, there's plenty of adventure in Pineiro's other-worldly tale of Jack Taylor, a man who jumps from the upper part of the atmosphere and winds up on an alternate earth. While it's a concept based on pure adrenaline, The Fall's meat lies in Taylor weighing two worlds-and ultimately choosing his own reality." --Paste Magazine

"Jack's adrenaline is contagious - The Fall will keep readers on the edges of their seats, waiting to find out what crazy stunt Jack will perform next and to learn the fate of this charming, daredevil hero." --Forces of Geek

R.J. PINEIRO is a twenty-seven-year veteran of the computer industry, where he held various positions at Advanced Micro Devices, Inc., retiring in 2011. He is the author of many internationally acclaimed novels including Shutdown, Firewall, Cyberterror, and Havoc, as well as the millennium thrillers, 01-01-00 and Y2K. He makes his home in central Texas, where he lives with his wife, Lory Anne, and his son, Cameron.

GOR009703735
The Fall by R.J. Pineiro
R.J. Pineiro
Used - Very Good
Hardback
Thomas Dunne Books
2015-07-30
336
1250052149
9781250052148
N/A
Book picture is for illustrative purposes only, actual binding, cover or edition may vary.
This is a used book - there is no escaping the fact it has been read by someone else and it will show signs of wear and previous use. Overall we expect it to be in very good condition, but if you are not entirely satisfied please get in touch with us.