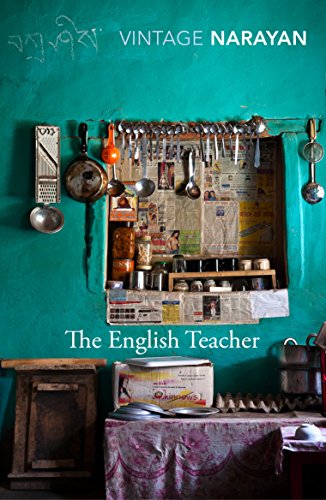 In Stock
$11.99
+10% GST
Krishna, an English teacher in the town of Malgudi, nagged by the feeling he's doing the wrong work, is nonetheless delighted by his domestic life, where his wife and young daughter wait for him outside the house every afternoon.
Very Good Good
5 in stock

Krishna, an English teacher in the town of Malgudi, nagged by the feeling he's doing the wrong work, is nonetheless delighted by his domestic life, where his wife and young daughter wait for him outside the house every afternoon. Devastated by the death of his wife, Krishna comes to realise what he really wants to do, and makes a decision that will change his life forever.

"Narayan wakes in me a spring of gratitude, for he has offered me a second home. Without him I could never have known what it is like to be Indian" * Graham Greene *
"Narayan's humour and compassion come from a deep universal well, with the result that he has transformed his imaginary township of Malgudi into a bubbling parish of the world" * Observer *
"In his humour and compassion, Narayan comes close to being a twentieth-century Indian Chekhov" * Sunday Telegraph *
"RK Narayan's Malgudi novels are humorous gems and it is a great pity that they are not better known. He wrote beautifully and with great compassion, something regrettably lacking in some humorous writing" -- Alexander McCall Smith
"An idyll as delicious as anything I have met in modern literature for a long time. The atmosphere and texture of happiness, and, above all, its elusiveness, have seldom been so perfectly transcribed." -- Elizabeth Bowen

R K Narayan's writing spans the greatest period of change in modern Indian history, from the days of the Raj - Swami and Friends (1935), The Bachelor of Arts (1937) and The English Teacher (1945) - to recent years of political unrest - The Painter of Signs (1976), A Tiger for Malgudi (1983), and Talkative Man (1987). He has published numerous collections of short stories, including Malgudi Days (1982), and Under the Banyan Tree (1985), and several works of non-fiction.

GOR002828126
The English Teacher by R. K. Narayan
R. K. Narayan
Used - Very Good
Paperback
Vintage Publishing
2001-08-02
192
0099282283
9780099282280
N/A
Book picture is for illustrative purposes only, actual binding, cover or edition may vary.
This is a used book - there is no escaping the fact it has been read by someone else and it will show signs of wear and previous use. Overall we expect it to be in very good condition, but if you are not entirely satisfied please get in touch with us.