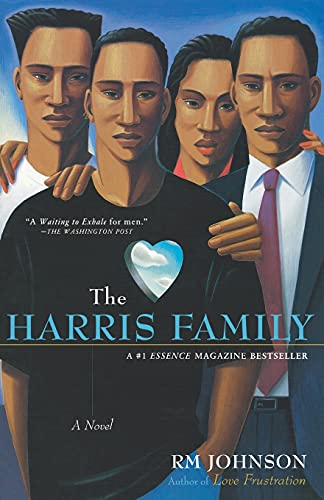 Out of Stock
$35.99
inc. GST
Filled with intrigue and romance, this new work by the author of "The Harris Men" is a captivating story of contemporary black relationships and, ultimately, a moving testament to the power of family, love, and forgiveness.
Very Good
Only 0 left

The Harris Family: A Novel by R. M. Johnson

The unforgettable crew of characters from RM Johnson's bestselling debut novel, The Harris Men, returns in a riveting story of love, loss, and second chances.
Julius Harris walked out on his family twenty-five years ago -- and not a moment goes by he doesn't regret it. Five years ago, after learning he had cancer, Julius tried to make peace with his three sons. It didn't take. Now, the disease has gone into remission. Overjoyed, Julius is grateful for this miracle, and the time it affords him to make up for his past mistakes.
It won't be easy. In Chicago, life isn't exactly simple for his three grown sons. The oldest, Austin, a successful attorney, struggles to be a good father to his children despite his ex-wife's attempts to turn them against him. Marcus, the middle son, wrestles with a fear of commitment that drives away the woman he loves. And young Caleb, just released from prison, fights to rebuild his life and win back his wife and child. The three Harris brothers have a hard enough time being there for each other -- let alone a father they haven't seen in years. Nor are they sure they even want him in their lives.
Filled with intrigue, romance, and shocking twists, The Harris Family is a deliciously gripping novel of contemporary black relationships and, ultimately, a moving testament to the power of family, love, and forgiveness.

Black Issues Book Review Real life with a touch of magic...a tightly knitted story of men, family, and the distance they must bridge.
Booklist A compassionate novel with strong characters.

R.M. Johnson is the author of ten books, including bestsellers The Harris Family and The Million Dollar Divorce. He holds an MFA in Creative Writing from Chicago State University. He lives in Atlanta, Georgia.

GOR007195372
The Harris Family: A Novel by R. M. Johnson
R. M. Johnson
Used - Very Good
Paperback
Simon & Schuster
2002-10-08
368
074342302X
9780743423021
N/A
Book picture is for illustrative purposes only, actual binding, cover or edition may vary.
This is a used book - there is no escaping the fact it has been read by someone else and it will show signs of wear and previous use. Overall we expect it to be in very good condition, but if you are not entirely satisfied please get in touch with us.