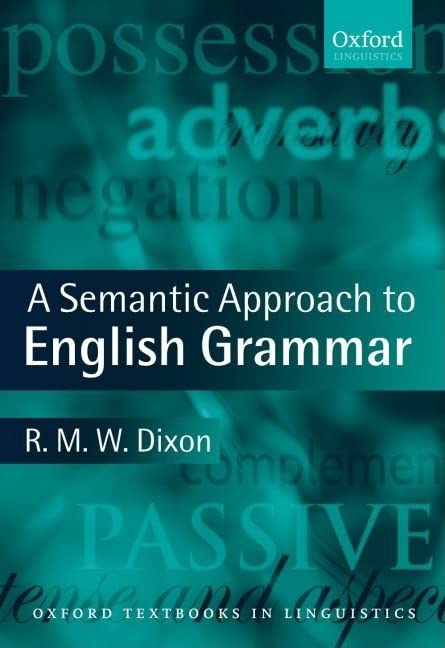 Used Price
$69.99
inc. GST
Free Shipping in Australia
Shows how grammar helps people communicate and looks at the ways grammar and meaning interrelate. This book starts from the notion that a speaker codes a meaning into grammatical forms which the listener is then able to recover. It uncovers a rationale for the varying grammatical properties of different words and explains many facts about English.
Very Good

This book shows how grammar helps people communicate and looks at the ways grammar and meaning interrelate. The author starts from the notion that a speaker codes a meaning into grammatical forms which the listener is then able to recover: each word, he shows, has its own meaning and each bit of grammar its own function, their combinations creating and limiting the possibilities for different words. He uncovers a rationale for the varying grammatical properties of different words and in the process explains many facts about English - such as why we can say I wish to go, I wish that he would go, and I want to go but not I want that he would go. The first part of the book reviews the main points of English syntax and discusses English verbs in terms of their semantic types including those of Motion, Giving, Speaking, Liking, and Trying. In the second part Professor Dixon looks at eight grammatical topics, including complement clauses, transitivity and causatives, passives, and the promotion of a non-subject to subject, as in Dictionaries sell well. This is the updated and revised edition of A New Approach to English Grammar on Semantic Principles. It includes new chapters on tense and aspect, nominalizations and possession, and adverbs and negation, and contains a new discussion of comparative forms of adjectives. It also explains recent changes in English grammar, including how they has replaced the tabooed he as a pronoun referring to either gender, as in When a student reads this book, they will learn a lot about English grammar in a most enjoyable manner.

This is, in many ways, a near-perfect model of how a descriptive grammar of ANY language should be presented. Although the grammatical treatment and exposition are excellent, for me, one of the best parts of the book are the examples and how they are presented. * Review by Michael W Morgan, Kobe City University of Foreign Studies *
Review from previous edition `Dixon makes insightful and extensive comments on each semantic subtype and its syntactic distribution. The motivated reader ... will find many valid observations and interesting details in Dixon's painstaking descriptions ... a valuable resource book for the nonspecialist who is curious about language.' Language
an ambitious and extensive account of English grammar ... Books which take a semantic approach to grammar or syntactic approach to semantics are increasingly common ... but I have no hesitation in saying that I find Dixon's book by far the most informative, the one most likely to startle readers repeatedly by telling them what they knew all along but hadn"t realized they knew. * Georgetown Journal of Languages and Linguistics *
will certainly repay repeated reading ... deserves the attention of any serious grammarian of English * Times Literary Supplement *

R.M.W. Dixon is Professor and Director of the Research Centre for Linguistic Typology at La Trobe University. His books include The Dyirbal Language of North Queensland (1972), Where have all the adjectives gone? and Other Essays in Semantics and Syntax (1982), Ergativity (1994), The Rise and Fall of Languages (1997), Australian Languages: their Nature and Development (2002), and The Jarawara Language of Southern Amazonia (2004). He is the co-editor, with Alexandra Aikhenvald, of the Oxford series Explorations in Linguistic Typology.