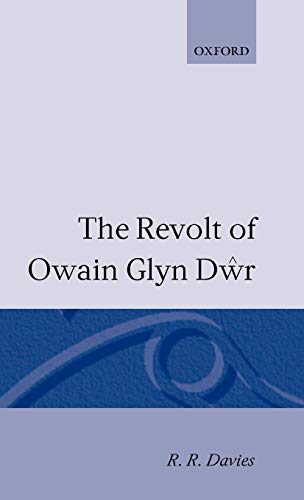 In Stock
$13.99
+10% GST
Owain Glyn Dwr is arguably the most famous figure in the history of Wales. His revolt (1400-1409), which was the last major Welsh rebellion against English rule, generated a remarkable vision of Wales as an independent country. This is the first scholarly work for over 50 years to present Owain and his revolt to a general audience.
Good
Only 1 left

Owain Glyn Dwr is arguably the most famous figure in the history of Wales. His revolt (1400-1409) was the last major Welsh rebellion against English rule. It established a measure of unity such as Wales had never previously experienced and generated a remarkable vision of Wales as an independent country with its own native prince, its own church, and its own universities. In the event, Owain's rebellion was defeated or, perhaps more correctly, burnt itself out. But Owain himself was not captured; and soon after his death he became a legendary hero among the Welsh people. In more recent times he has come to be regarded as the father of modern Welsh nationalism. Written by one of Britain's leading medieval historians, this book will appeal to those who are fascinated by national heroes in all periods. It is also of particular interest to those who are intrigued by this most famous movement in the history of Wales, and by the remarkable man who led the rebellion.

It is empowered by all the resources of modern scholarship. This is history at its most professional, thorough and disinterested...what this book does is to set the familiar story in an altogether new richness of context. Davies's range of knowledge and reference is astonishing...a wonderfully learned and enlightened survey of one corner of Europe at a particularly significant moment of its history. * The Independent *
It opens with a delightful perambulation of the country int the last decade before 1400...Professor Davies it to be warmly congratulated on this work which so thoroughly explores the character, context and contribution of Owain Glyn Dwr's revolt * Medieval Life *
lively and authoritative account of the revolt of Owain Glyn Dwr * London Review of Books *
In a brilliant opening chapter, Professor Davies paints a vivid picture of Wales in the 1390's by tracing the routes which might well have been taken by two of the century's typical travellers. * (Cardiff) Western Mail *
accomplished account of the rising ... in a particularly attractive feature of this study, the author also draws extensively on contemporary literary evidence and the roots of the Welsh prophetic tradition to illustrate the nature of the revolt and the society that sustained it ... Davies writes shrewdly and objectively on the English counter-strategy ... Professor R. Davies has fused the historical and literary sources on the Glyn Dwr revolt into a major work of synthesis that will surely last for many years as a modern, authoritative study of the great rebellion. * David Rees, The New Welsh Review, July 1996 *
Impeccable scholarship ... infused with an enlivening sympathy for the subject, and the result is a splendid book, reliable, readable and shot through with insights about divided societies which have relevance far beyond the boundaries of medieval Wales. This is not a biography, because the evidence does not permit one. However, it is the definitive account of one of the great events in Welsh history, and it is fortunate to have found as its chronocler one of Wales's greatest historians. * Art Cosgrove, University College, Dublin, Irish Historical Studies *
he has a fine grasp of the historical context * Max Davidson, The Daily Telegraph *
R.R. Davies's comprehensive work, which deserves to become a classic, tackles the problem of the revolt of Glyn D^wr, analysing in depth its many facets and placing it firmly in the context of medieval Welsh society, drawing a more detailed picture than ever before of the complexities of the events of 1400-15. * Rhidian Griffiths, National Library of Wales, Cambrian Medieval Celtic Studies, Number 32, Winter 1996 *
excellent and enjoyable book ... As the author says, he has 'scoured the archives' and in doing so he has written what must now be the definitive account, not only of the revolt but also of the social, political and cultural environment in which it occurred. * A.D. Carr, University of Wales, Bangor, Ecclesiastical History, Vol. 48, No. 1 - Jan '97 *
Rees Davies has a rare knack of producing books with the stamp of lifetime achievement ... His study of the Owain Glyn Dwr revolt is bound to reach a wide audience ... he has a mastery of his material which gives his writing exceptional clarity and purpose. ... well-crafted book ... At the end of his book readers will find their understanding of the middle ages enhanced and possibly altered. * The Times Higher Education Supplement, 18 July 1997 *

Rees Davies is Chichele Professor of Medieval History at All Soul's College, Oxford, and is currently President of the Royal Historical Society. He is the author of The Age of Conquest: Wales 1063-1415, joint winner of the Wolfson Literary Award for History, 1987.

GOR001994296
The Revolt of Owain Glyn Dwr by R. R. Davies (All Souls College, Oxford)
R. R. Davies (All Souls College, Oxford)
Used - Good
Hardback
Oxford University Press
1995-11-09
414
0198205082
9780198205081
N/A
Book picture is for illustrative purposes only, actual binding, cover or edition may vary.
This is a used book - there is no escaping the fact it has been read by someone else and it will show signs of wear and previous use. Overall we expect it to be in very good condition, but if you are not entirely satisfied please get in touch with us.