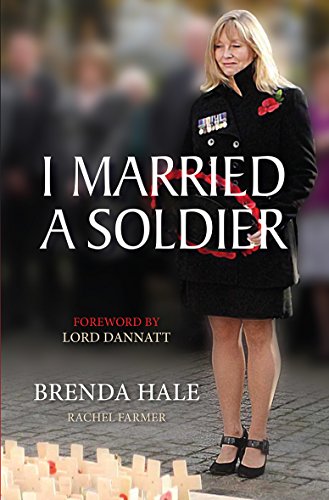 I Married a Soldier
by Brenda Hale

In Stock
$18.49
inc. GST
How one woman took on the Ministry of Defence after her husband Mark was killed in action.
Very Good Good
6 in stock

I Married a Soldier Summary

I Married a Soldier by Brenda Hale

"I warned you Brenda, that's what you get for dating a soldier - heartache. A life of heartache." It's an army spouse's worst nightmare. It's what you fear more than anything. But fear cannot prepare you for the reality, or the desperate heartache. I Married a Soldier tells the deeply moving, true story of Brenda Hale whose husband, Mark, was taken from her in an instant while serving in Afghanistan. In the midst of the grief, distress, and financial confusion caused by Mark's death, Brenda became determined to fight for the rights of her two daughters and their futures. Her campaigning to support bereaved forces families eventually led her into politics, where she rose to be a member of the Northern Ireland Assembly. This is the powerful story of how one woman found a way through an event that threatened to crush her, by drawing on her faith in God and on a personal strength she didn't know she had.

I Married a Soldier Reviews

Courage is found often only when we face seemingly impossible challenges - Brenda Hale's moving and powerful story is all about that kind of courage. It's an inspiration to read how, with strength from her own faith, support from friends and her own steely determination, she has overcome so much and has committed to fight to help other bereaved forces families. -- Bear Grylls
I have just read the book in one sitting. It is a great story, pacy, and an easy read . I very much enjoyed reading this account of family, faith, love and hope for the future. In her election speech in May 2011, Brenda said: "Army wives are a very special breed of person. We are strong and we are tough and you have to use that toughness and just keep moving forward." This book will hopefully inspire others to move forward. -- David Coulter * Chaplain General *
As a journalist, people often ask if I am affected by the stories I cover ? Three years ago I interviewed a bereaved young widow called Brenda Hale. I heard her story, saw her home and met her children. Her heart was completely broken, and listening to her pain and love for her lost husband Mark broke mine as well. If you have ever lost the love of your life, you will cry reading this book, and you will understand what inspired Brenda to take up a life of public service. Her story is obviously a love story and she did indeed marry a soldier. As for Mark, who did he marry? Well, in my view he wasn't the only `warrior' in the Hale household. Am I affected by stories? Very definitely, as you will be too. -- Eamonn Holmes * TV prsenter *
We live in a broken world where there is much pain and sadness which causes some people to become bitter and angry. Brenda Hale's account of her experience of that brokenness in the loss of her hero husband, Mark, is a wonderful illustration of how good can overcome evil, and how true faith grows strong in the face of the most awful tragedies. When I had the privilege of visiting Brenda in the immediate aftermath of her loss, she showed remarkable fortitude, dignity and strength. Her life and service since then bears testimony to the authenticity and reality of the faith which she and Mark shared. This is an inspirational account which will profoundly affect all who read it. -- Stafford Carson * former Moderator of the Presbyterian Church of Ireland *
"As a Member of Parliament who was raised in a strife-torn Northern Ireland, I have had the honour of meeting many exceptional people who have overcome great adversity to make such a positive contribution to our society. Brenda Hale is perhaps one of the most extraordinary of these people who portrays the best of the human spirit. From that fateful moment when I called on Brenda, following the tragic death of her beloved husband Mark, I could see that this was a woman of great courage, integrity and tremendous faith. I have watched Brenda as she has continued on her remarkable journey from overwhelming loss to championing the cause of our armed forces, their families and veterans, and then to her election as a Member of the Northern Ireland Assembly. This is a story of love, perseverance and faith, of a life that is firmly rooted in a higher calling." -- Sir Jeffrey Donaldson
"Wars are ultimately all about people. Behind the uniform, every soldier is a husband, a father, a son, a friend - this is what motivates them as they stand shoulder to shoulder on the battlefield. I married a soldier captures the essence of a giant among men and and illuminates why all those who had the privilege to serve with him will always be better for having known Mark Hale. Ultimately it charts the tragic personal consequences of war for his beloved family. It is both gut-wrenching and heart-warming. The book is a great tribute to an inspirational man." -- Major General Rupert Jones

Brenda Hale is a Democratic Unionist Party politician in Northern Ireland who was elected to the Northern Ireland Assembly for the Lagan Valley in 2011. Hale's husband served with the British Army and was killed in Afghanistan in 2009. Brenda then started to speak to the Ministry of Defence on behalf of other war widows and has since lobbied and campaigned robustly to have the Military Covenant UK wide and for the government to take full responsibility in looking after injured service personnel and bereaved families. She has a BSc (Hons) in Social Policy through the Open University and is Lagan Valley Member of the Legislative Assembly, Northern Ireland (Democratic Unionist Party). Rachel Farmer is a former newspaper journalist working as a freelance editor, writer and communications specialist. With experience in professional PR and magazine editing, she currently manages communications for an international charity alongside writing and editing a magazine for the Armed Forces Christian Union. She is married to a chaplain in the British Army and lives close to Chichester Harbour on the English south coast.

GOR008799496
I Married a Soldier by Brenda Hale
Brenda Hale
Used - Very Good
Paperback
Lion Hudson Plc
2017-08-18
256
0745980112
9780745980119
N/A
Book picture is for illustrative purposes only, actual binding, cover or edition may vary.
This is a used book - there is no escaping the fact it has been read by someone else and it will show signs of wear and previous use. Overall we expect it to be in very good condition, but if you are not entirely satisfied please get in touch with us.