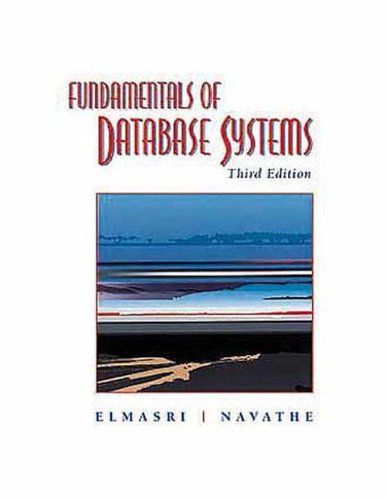 In Stock
$37.99
inc. GST
Combines clear examples of theory and design with an introduction to modern database technologies. The text covers popular DBMS products such as Oracle and Access and focuses on the relational model and object-oriented developments such as SQL3 and ODMG.
Very Good Well Read
Only 1 left

Fundamentals of Database Systems combines clear explanations of theory and design, broad coverage of models and real systems, and excellent examples with up-to-date introductions to modern database technologies. Now in its third edition, this book has been revised and updated to reflect the latest trends in technological and application development. This edition focuses on the relational model and includes recent object-oriented developments such as SQL3 and ODMG. Elmasri and Navathe provide coverage of the popular DBMS products, in particular the relational systems Oracle (TM) and Microsoft Access (R). They also address advanced modeling and system enhancements in the areas of active databases, temporal and spatial databases, and multimedia data models. The new edition also surveys the latest application areas of data warehousing, data mining, digital libraries, GIS, and genome databases.

Ramez A. Elmasri is a professor in the department of Computer Science and Engineering at the University of Texas at Arlington. He holds M.S. and Ph.D. degrees in Computer Science from Stanford University, and a B.S. degree in Electrical Engineering from Alexandria University. He is known for his work on conceptual database modeling, temporal database design and indexing, database query languages and interfaces, and systems integration. Prior to his current position, Elmasri worked for Honeywell and the University of Houston. Elmasri has over 70 refereed publications in journals and conference proceedings. He has conducted research in many areas of database systems over the past twenty years, and in the area of integration of systems and software over the past nine years. He has advised many MS and PhD students. Elmasri's research has been sponsored by grants from NSF, NASA, ARRI, Texas Instruments, Honeywell, Digital, and the State of Texas. He has been an Associate Editor of the Journal of Parallel and Distributed Databases and a member of the steering committee for the International Conference on Conceptual Modeling (formerly ER Conference). He was Program Chair for the 12th International Conference on Conceptual Modeling (ER'93) and Program Vice Chair for the 1994 IEEE International Conference on Data Engineering. He is the leading author of the textbook Fundamentals of Database Systems, which is used in many universities all over the world and has been translated into several languages. The third edition is scheduled for publication in July 1999 (Addison-Wesley). Elmasri has served on the program committees of many international conferences, and has presented tutorials and keynote talks at a number of international conferences. He has received the Robert Q. Lee teaching award of the College of Engineering of UT-Arlington. Shamkant Navathe is a professor and the head of the database research group at the College of Computing, Georgia Institute of Technology, Atlanta. He is well-known for his work on database modeling, database conversion, database design, distributed database allocation, and database integration. He has worked with IBM and Siemens in their research divisions and has been a consultant to various companies including Digital,CCA, HP and Equifax. He was the General Co-chairman of the 1996 International VLDB (Very Large Data Base) conference in Bombay, India. He was also program co-chair of SIGMOD 1985 and General Co-chair of the IFIP WG 2.6 Data Semantics Workshop in 1995. He has been an associate editor of ACM Computing Surveys, and IEEE Transactions on Knowledge and Data Engineering. He is also on the editorial boards of Information Systems (Pergamon Press) and Distributed and Parallel Databases (Kluwer Academic Publishers). He is an author of the book, Fundamentals of Database Systems, with R. Elmasri (Addison Wesley) which is currently the leading database text-book worldwide. He also co-authored the book Conceptual Design: An Entity Relationship Approach (Addison Wesley, 1992) with Carlo Batini and Stefano Ceri. His current research interests include human genome data management,intelligent information retrieval, data mining and warehousing, web-based knowledge warehouses and mobile database synchronization. Navathe holds a Ph.D. from the University of Michigan and has over 100 refereed publications.

GOR001191615
Fundamentals of Database Systems: International Edition by Ramez Elmasri
Ramez Elmasri
Used - Very Good
Paperback
Pearson Education (US)
1999-01-01
1009
0201542633
9780201542639
N/A
Book picture is for illustrative purposes only, actual binding, cover or edition may vary.
This is a used book - there is no escaping the fact it has been read by someone else and it will show signs of wear and previous use. Overall we expect it to be in very good condition, but if you are not entirely satisfied please get in touch with us.