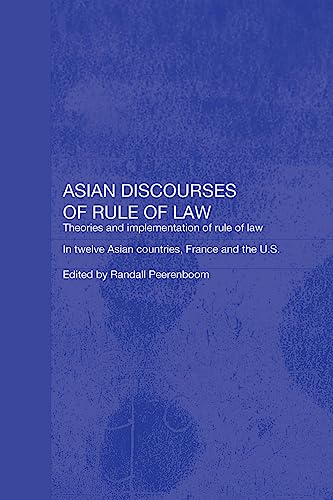 Used Price
$107.99
inc. GST
Free Shipping in Australia
This title considers how rule of law is viewed and implemented in Asia. Chapters on France and the USA provide a benchmark on how the concept has evolved, is applied and is implemented in a Roman law and a common law jurisdiction.
Very Good

Rule of law is one of the pillars of the modern world, and widely considered necessary for sustained economic development, the implementation of democracy and the protection of human rights. It has however emerged in Western liberal democracies, and some people question how far it is likely to take root fully in the different cultural, economic and political context of Asia. This book considers how rule of law is viewed and implemented in Asia. Chapters on France and the USA provide a benchmark on how the concept has evolved, is applied and is implemented in a civil law and a common law jurisdiction. These are then followed by twelve chapters on the major countries of East Asia, and India, which consider all the key aspects of this important issue.

'The edited volume is certainly a valuable contribution to the current limited rule of law literature, particularly in the Asian context.' - Singapore Journal of Legal Studies, December 2004

Randall Peerenboom is a Professor of Law at UCLA Law School. He obtained a B.A. in Philosophy, M.A. in Chinese Religion and Ph.D. in Philosophy before obtaining a J.D. from Columbia Law School. He has written extensively on Chinese law and philosophy. From 1994 to 1998, he practiced law with a major international law firm in Beijing. In addition to advising on various aspects of foreign investment in China, he often serves as an expert witness on PRC legal issues and is Of Counsel at Yiwen Law Firm. He is now working on a study of the relation between culture and human rights; an empirical survey of supervision of the judiciary in the PRC; and a philosophical exploration of a form of Confucian collectivism as an alternative to western liberal democracy.

GOR010740546
Asian Discourses of Rule of Law by Randall Peerenboom (UCLA School of Law, USA)
Randall Peerenboom (UCLA School of Law, USA)
Routledge Law in Asia
Used - Very Good
Paperback
Taylor & Francis Ltd
2003-12-18
504
0415326125
9780415326124
N/A
Book picture is for illustrative purposes only, actual binding, cover or edition may vary.
This is a used book - there is no escaping the fact it has been read by someone else and it will show signs of wear and previous use. Overall we expect it to be in very good condition, but if you are not entirely satisfied please get in touch with us.