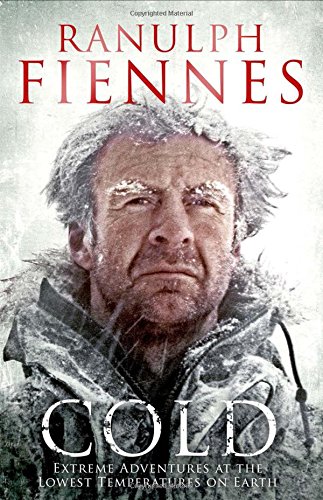 Cold: Extreme Adventures at the Lowest Temperatures on Earth by Ranulph Fiennes

There are only few human beings who can adapt, survive and thrive in the coldest regions on earth. And below a certain temperature, death is inevitable.

Sir Ranulph Fiennes has spent much of his life exploring and working in conditions of extreme cold. The loss of many of his fingers to frostbite is a testament to the horrors man is exposed to at such perilous temperatures. With the many adventures he has led over the past 40 years, testing his limits of endurance to the maximum, he deservedly holds the title of 'the world's greatest explorer'.

Despite our technological advances, the Arctic, the Antarctic and the highest mountains on earth, remain some of the most dangerous and unexplored areas of the world. This remarkable book reveals the chequered history of man's attempts to discover and understand these remote areas of the planet, from the early voyages of discovery of Cook, Ross, Weddell, Amundsen, Shackleton and Franklin to Sir Ranulph's own extraordinary feats; from his adventuring apprenticeship on the Greenland Ice Cap, to masterminding over the past 5 years the first crossing of the Antarctic during winter, where temperatures regularly plummeted to minus 92C.

Both historically questioning and intensely personal, Coldis a celebration of a life dedicated to researching and exploring some of the most hostile and brutally cold places on earth.

Sir Ranulph Fiennes was the first man to reach both poles by surface travel and the first to cross the Antarctic Continent unsupported. In the 1960s he was removed from the SAS Regiment for misuse of explosives but, after joining the army of the Sultan of Oman, received that country's Bravery Medal on active service in 1971. He is the only person yet to have been awarded two clasps to the Polar medal for both Antarctic and the Arctic regions. Fiennes has led over thirty expeditions, including the first polar circumnavigation of the Earth, and in 2003 he ran seven marathons in seven days on seven continents in aid of the British Heart Foundation. In 1993 Her Majesty the Queen awarded Fiennes the Order of the British Empire (OBE) because, on the way to breaking records, he has raised over GBP14 million for charity. He was named Best Sportsman in the 2007 ITV Great Briton Awards and in 2009 he became the oldest Briton to reach the summit of Everest.

GOR005362265
Cold: Extreme Adventures at the Lowest Temperatures on Earth by Ranulph Fiennes
Ranulph Fiennes
Used - Very Good
Hardback
Simon & Schuster Ltd
2013-11-07
496
1471127826
9781471127823
N/A
Book picture is for illustrative purposes only, actual binding, cover or edition may vary.
This is a used book - there is no escaping the fact it has been read by someone else and it will show signs of wear and previous use. Overall we expect it to be in very good condition, but if you are not entirely satisfied please get in touch with us.