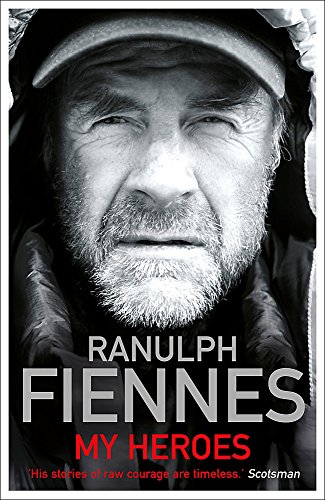 In MY HEROES the 'world's greatest living explorer' (Guinness Book of Records), writes about the people who have inspired him - from explorers to policemen, families to freedom fighters.

Wherever in the world Ranulph gives one of his lectures or motivational speeches, someone always asks: 'Who inspired you to do all the crazy things you've done?' For the first time he explores this idea by revealing his own personal heroes and what lessons their actions may have taught him in his own often hazardous profession.

This book describes the extraordinary and often horrific events that led to these ordinary individuals becoming Ranulph's great heroes. From polar survivor to knifed-and-beaten policeman, from a woman missionary to a special forces soldier, these wonderful people will make you proud to be part of the human race.

'Fiennes is making the case for a closer examination of the example set by the men and women he considers heroes'. The Times

'Refreshingly different... this salute to mostly unsung heroes is an inspirational reminder of human goodness'. * Daily Mail *
'A gripping salute to those whose determination in the face of fear leaves the rest of us awestruck... thoroughly researched and grippingly detailed... his stories of raw courage are timeless'. * Scotsman *
'Fiennes is making the case for a closer examination of the example set by the men and women he considers heroes'. * The Times *
(It's painfully) compelling. * Evening Standard *
The sort of book that will suggest fascinating lines of research to find out more about some of the subjects. The author has given us a splendid read. * The Canberra Times *
Acclaim for Ranulph's previous books: * . *
'Rip-roaringly readable' * Guardian on MAD DOGS AND ENGLISHMEN *
Sir Ranulph has earned his place in the heroic roll call of Scott, Shackleton and the rest. * Daily Mail *
'Ran epitomises British phlegm, and he puts all other glory-seekers to shame. Long may he continue to make us glad that we are not him, while we stand in awe.' * Country Life *
His courage, determination, stamina - and madness - are truly awesome.' * Daily Express *

Sir Ranulph Fiennes was the first man to reach both poles by surface travel and the first to cross the Antarctic Continent unsupported. In the 1960s he was removed from the SAS Regiment for misuse of explosives but, joining the army of the Sultan of Oman, received that country's Bravery Medal on active service in 1971. He is the only person yet to have been awarded two clasps to the Polar medal for both Antarctic and the Arctic regions. Fiennes has led over 30 expeditions including the first polar circumnavigation of the Earth, and in 2003 he ran seven marathons in seven days on seven continents in aid of the British Heart Foundation. In 1993 the Queen awarded Fiennes the Order of the British Empire (OBE) because, on the way to breaking records, he has raised over GBP14 million for charity. He was named Best Sportsman in the 2007 ITV Great Briton Awards and in 2009 he became the oldest Briton to reach the summit of Everest.

GOR004338141
My Heroes: Extraordinary Courage, Exceptional People by Ranulph Fiennes
Ranulph Fiennes
Used - Very Good
Paperback
Hodder & Stoughton General Division
2012-09-27
320
1444722468
9781444722468
N/A
Book picture is for illustrative purposes only, actual binding, cover or edition may vary.
This is a used book - there is no escaping the fact it has been read by someone else and it will show signs of wear and previous use. Overall we expect it to be in very good condition, but if you are not entirely satisfied please get in touch with us.