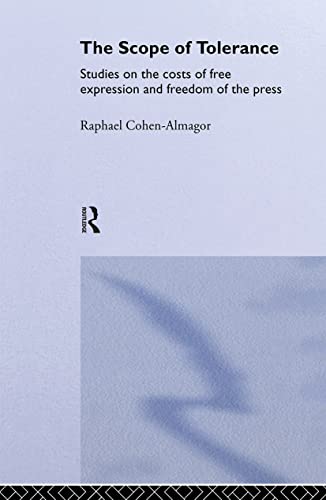 The Scope of Tolerance
by Raphael Cohen-Almagor (University of Haifa, Israel)

Used Price
$83.99
inc. GST
Free Shipping in Australia
Presents an assessment of the risks and limits of contemporary democracy. This is a study concerned with the limits of tolerance.
Reviews:
Trustpilot
Very Good

The Scope of Tolerance Summary

The Scope of Tolerance: Studies on the Costs of Free Expression and Freedom of the Press by Raphael Cohen-Almagor (University of Haifa, Israel)

One of the dangers in any political system is that the principles that underlie and characterize it may, through their application, bring about its destruction. Liberal democracy is no exception. Moreover, because democracy is relatively a young phenomenon, it lacks experience in dealing with pitfalls involved in the working of the system - the `catch' of democracy.

This is an interdisciplinary study concerned with the limits of tolerance, this `democratic catch', and the costs of freedom of expression. Rights are costly, and someone must pay for them. We can and should ask about the justification for bearing the costs, weighing them against the harms inflicted upon society as a result of a wide scope of tolerance. While recognizing that we have the need to express ourselves, we should also inquire about the justifications for tolerating the damaging speech and whether these are weighty enough.

This book combines theory and practice, examining issues of contention from philosophical, legal and media perspectives and covers such issues as:

This book is essential reading for anyone who has research interests in political theory, extremism, and free speech.

Customer Reviews - The Scope of Tolerance

Table of Contents: Introduction 1. The Scope of Tolerance 2. The Right to Privacy: Part I 3. The Right to Privacy: Part II 4. Offense to Sensibilities: Part I 5. Offense to Sensibilities: Part II 6. On Incitement 7. Hate Speech in Canada 8. The Terrorists' Best Ally: Media Coverage of Terror 9. The Terrorists' Best Ally: The FLQ Crisis Conclusion Index

GOR009701095
The Scope of Tolerance: Studies on the Costs of Free Expression and Freedom of the Press by Raphael Cohen-Almagor (University of Haifa, Israel)
Raphael Cohen-Almagor (University of Haifa, Israel)
Extremism and Democracy
Used - Very Good
Paperback
Taylor & Francis Ltd
2005-09-19
296
0415357586
9780415357586
N/A
Book picture is for illustrative purposes only, actual binding, cover or edition may vary.
This is a used book - there is no escaping the fact it has been read by someone else and it will show signs of wear and previous use. Overall we expect it to be in very good condition, but if you are not entirely satisfied please get in touch with us.