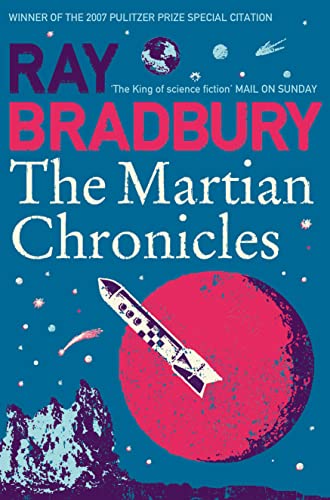 The Martian Chronicles
by Ray Bradbury

The strange and wonderful tale of man's experiences on Mars, filled with intense images and astonishing visions.The classic work that transformed Ray Bradbury into a household name.

The Martian Chronicles by Ray Bradbury

The strange and wonderful tale of man's experiences on Mars, filled with intense images and astonishing visions.The classic work that transformed Ray Bradbury into a household name.

Written in the age of the atom when America and Europe optimisitcally viewed the discovery of life on Mars as inevitable, Bradbury's 1940s short stories of a brutal, stark and unforgiving martian landscape were as shocking and visionary as they were insightful.

`The Martian Chronicles' tells the story of humanity's repeated attempts to colonize the red planet. The first men were few. Most succumbed to a disease they called the Great Loneliness when they saw their home planet dwindle to the size of a pin dot. Those few that survived found no welcome. The shape-changing Martians thought they were native lunatics and duly locked them up.

More rockets arrived from Earth, piercing the hallucinations projected by the Martians. People brought their old prejudices with them - and their desires and fantasies, tainted dreams. These were soon inhabited by the strange native beings, with their caged flowers and birds of flame.

`As a science fiction writer, Ray Bradbury has long been streets ahead of anyone else' Daily Telegraph

`No other writer uses language with greater originality and zest. he seems to be a American Dylan Thomas' Sunday Telegraph

GOR001409357
The Martian Chronicles by Ray Bradbury
Ray Bradbury
Used - Very Good
Paperback
HarperCollins Publishers
1995-09-04
320
0006479235
9780006479239
N/A
Book picture is for illustrative purposes only, actual binding, cover or edition may vary.
This is a used book - there is no escaping the fact it has been read by someone else and it will show signs of wear and previous use. Overall we expect it to be in very good condition, but if you are not entirely satisfied please get in touch with us.