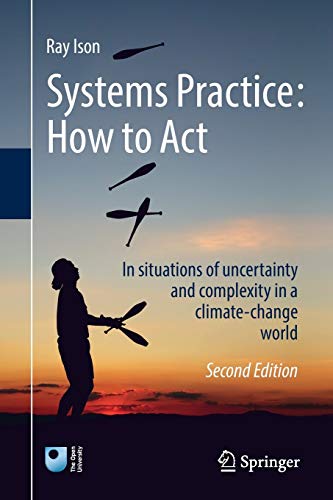 Systems Practice: How to Act by Ray Ison

This book shows how to do systems thinking and translate that thinking into praxis (theory informed practical action). Part III identifies the main factors that constrain the uptake of systems practice and makes the case for innovation in practice by means of systemic inquiry, systemic action research and systemic intervention.

Systems Practice: How to Act: In situations of uncertainty and complexity in a climate-change world by Ray Ison

This book shows how to do systems thinking and translate that thinking into praxis (theory informed practical action). It will be welcomed by those managing or governing in situations of complexity and uncertainty across all domains of professional and personal life. The development of capabilities to think and act systemically is an urgent priority. Humans are now a force of nature, affecting whole-earth dynamics including the earth's climate - we live in an Anthropocene or Capitalocene and are confronted by the emergence of a 'post-truth', 'big data' world. What we have developed, organisationally and institutionally, seems very fragile. An imperative exists to recover whatever systemic sensibilities we still retain, to foster systems literacy and to invest in systems thinking in practice capability. This will be needed in future at personal, group, community, regional, national and international levels, all at the same time.
Systems Practice: How to Act is structured into four parts. Part I introduces the societal need to invest in systems thinking in practice, in contexts of uncertainty and complexity epitomised by the challenges of responding to human-induced climate change. Part II unpacks what is involved in systems practice by means of a juggler isophor; examining situations where systems thinking offers useful understanding and opportunities for change. Part III identifies the main factors that constrain the uptake of systems practice and makes the case for innovation in practice by means of systemic inquiry, systemic action research and systemic intervention. The book concludes with Part IV, which critically examines how systems practice is, or might be, utilised at different levels from the personal to the societal.

Ray Ison, Professor of Systems at The Open University (OU) in the UK since 1994, is a member of the Applied Systems Thinking in Practice (ASTiP) Group in the STEM Faculty. With colleagues, he has made pioneering contributions to Systems education (a field he chooses to call 'cybersystemics'), at both undergraduate and postgraduate levels. He has an established international reputation as a researcher, teacher, author and consultant, has led major change management projects, and held (or holds) significant international leadership positions in the cybersystemics field (e.g. President of ISSS 2014-15). His research and scholarship is focused on the presence or absence of systemic relations between the social and ecological, or what he terms 'systemic governance'. In 2008, he established the Systemic Governance Research Program within the Sustainability Institute at Monash University, Australia which he led till 2015. Prior to joining the OU he worked in Australia at the

Professor Ray Ison is regular keynote speaker at national and international conferences and is frequently invited to run workshops. As well as publishing numerous journal papers, he has edited or co-edited nine journal special editions and co-authored or co-edited four books including: Cow up a Tree. Knowledge and Learning for Change in Agriculture: Case studies from industrial countries (2000); Agricultural Extension and Rural Development: Breaking out of Knowledge Transfer Traditions (2007) and Agronomy of Grassland Systems (1997).

NPB9781447173502
9781447173502
1447173503
Systems Practice: How to Act: In situations of uncertainty and complexity in a climate-change world by Ray Ison
Ray Ison
New
Paperback
Springer London Ltd
2017-08-24
354
N/A
Book picture is for illustrative purposes only, actual binding, cover or edition may vary.
This is a new book - be the first to read this copy. With untouched pages and a perfect binding, your brand new copy is ready to be opened for the first time
Trustpilot