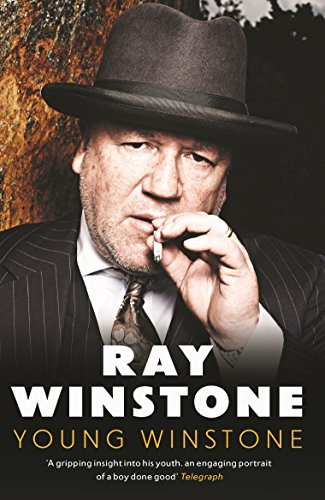 Ray Winstone's amazing talent for bringing out the humanity buried inside his often brutal screen characters - violent offender in Scum, wife-beater in Nil by Mouth, retired blagger in Sexy Beast - has made him one of the most charismatic actors of his generation. But how do these uncompromising and often haunting performances square with his off-duty reputation as the ultimate salt-of-the-earth diamond geezer? The answer lies in the East End of his youth. Revisiting the bomb-sites and boozers of his childhood and adolescence, Ray Winstone takes the reader on an unforgettable tour of a cockney heartland which is at once irresistibly mythic and undeniably real. Told with its author's trademark blend of brutal directness and roguish wit, Young Winstone offers a fascinating insight into the social history of East London, as well as a school of hard knocks coming-of-age story with a powerful emotional punch.

A gripping insight into his youth . . . For fans of his violent turns in Scum, Nil by Mouth or Sexy Beast, this is a perfect literary counterpart. For everyone else, it's an engaging portrait of a boy done good * * Telegraph * *
Brilliant . . . Young Winstone is a must-read * * Shortlist * *
As much about London as his nascent career. Ray made such an impression in Scum that I still remember his prison number, and he is just as vivid on his formative years, losing his virginity at 14 standing up by the mini-golf, and generally running riot around Mile End. There'll be another volume, I hope * * Independent on Sunday, Best books on film in 2014 * *
Worth a read for anyone who enjoys Ray's cheeky charms * * Empire * *

Ray Winstone was born in Hackney Hospital in February 1957, and spent the early years of his life playing on the bombsites of Plaistow. At the age of eight, his family moved him up the A10 to the cultural wasteland of Enfield, and from that moment on, Ray was constantly looking for ways to get back home to the East End - from 'banging up' on his dad's market stalls, to winning 80 out of 88 bouts as a three-time London schoolboy boxing champion for Bethnal Green's famous Repton club. Having achieved the rare distinction of being suspended from nursery school, he was asked to leave a series of educational establishments (including drama college), before finally graduating with first-class honours from the university of life.

GOR006752914
Young Winstone by Ray Winstone
Ray Winstone
Used - Very Good
Paperback
Canongate Books Ltd
2015-06-04
272
1782112456
9781782112457
N/A
Book picture is for illustrative purposes only, actual binding, cover or edition may vary.
This is a used book - there is no escaping the fact it has been read by someone else and it will show signs of wear and previous use. Overall we expect it to be in very good condition, but if you are not entirely satisfied please get in touch with us.