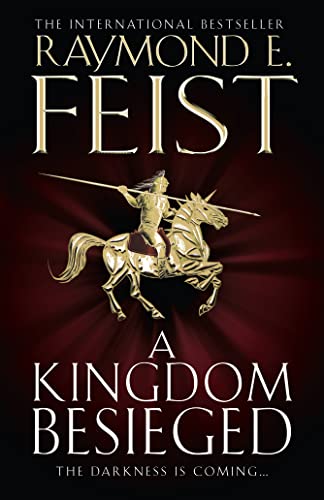 Discover the fate of the original black Magician, Pug, and his motley crew of agents who safeguard the world of Trigia, as prophecy becomes truth in the first book of the last ever Midkemian trilogy.

Discover the fate of the original black Magician, Pug, and his motley crew of agents who safeguard the world of Trigia, as prophecy becomes truth in the first book of the last ever Midkemian trilogy.

The Darkness is coming...

The Kingdom is plagued by rumour and instability. Kingdom spies in Kesh have been disappearing - either murdered, or turned to the enemy side. Information has become scant and unreliable; but one thing appears clear. Dark forces are on the move...

Since Pug and the Conclave of Shadows enforced peace after the last Keshian invasion, the Empire has offered no threat. But now factions are rising and Jim Dasher reports mobilizations of large forces in the Keshian Confederacy.

As the men of the West answer the King's call to muster, Martin conDoin - left as caretaker of Crydee Keep - will suddenly be confronted with the vanguard of an invading army. He reminds himself that he is a year older than his legendary ancestor, Prince Arutha, was when he stood firm against the Tsurani invasion, but Arutha had an army to command, and Martin is left with old men and young boys.

Massive events are about to unfold, events which threaten the future of all human life in Midkemia...

` Epic scope...vivid imagination...a significant contribution to the growth of the field of fantasy' Washington Post

Feist is one of the world's leading fantasy writers. His Riftwar and Serpentwar Sagas have been global bestsellers for years.

Born and raised in Southern California, Raymond E. Feist was educated at the University of California, San Diego, where he graduated with honours in Communication Arts. He is the author of the bestselling and critically acclaimed Riftwar Saga.

GOR002519698
A Kingdom Besieged (The Chaoswar Saga, Book 1) by Raymond E. Feist
Raymond E. Feist
The Chaoswar Saga
Used - Very Good
Hardback
HarperCollins Publishers
2011-01-15
416
0007264763
9780007264766
N/A
Book picture is for illustrative purposes only, actual binding, cover or edition may vary.
This is a used book - there is no escaping the fact it has been read by someone else and it will show signs of wear and previous use. Overall we expect it to be in very good condition, but if you are not entirely satisfied please get in touch with us.