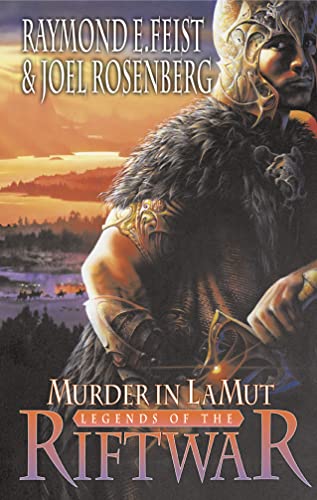 The second novel of a major new Feist acquisition, returning to his best-loved series. Written with Joel Rosenberg.

Murder in Lamut (Legends of the Riftwar, Book 2) by Raymond E. Feist

The second novel of a major new Feist acquisition, returning to his best-loved series. Written with Joel Rosenberg.

The heavy action was supposedly at Crydee these days which meant that the one place they could be sure the three of them were not going was Crydee. Come spring, the privateer Melanie was due in Ylith, and its captain could be counted on for a swift conveyance away for sure, and likely not to murder them in their sleep.
That would be bad for business.
But away where?
That wasn't Durine's worry. Kethol would surely be able to find the three of them somebody who needed men who knew which part of the sword you used to cut with and which part you used to butter your bread, and Pirojil would be able to negotiate a price at least half again what the employer was ready to pay. All Durine would have to do was kill people.

That was fine with him.

Durine, Kethol and Pirojil are three mercenaries who have spent twenty years fighting other people's battles: against the Tsurani and the Bugs and the goblins, and now it seems they've run out of Tsurani, Bugs and goblins to kill. The prospect of a few months of garrison duty offers a welcome respite; but then they are given an assignment that seems, on the surface, like cushy work - to protect a lady and her husband and deliver them safely to the city of Lamut.
It should all have been so simple...

Raymond E. Feist is the author of the bestselling and critically acclaimed Riftwar Saga, the Serpentwar Saga and the epic Krondor series.

Joel Rosenberg is best-known for The Guardian of the Flame sequence. His other fantasy work includes D'Shai novels and the Keeper of the Hidden Ways series.

Raymond E. Feist was born and raised in Southern California. He was educated at the University of California, San Diego, where he graduated with honours in Communication Arts. He is the author of the bestselling and critically acclaimed Riftwar Saga (Magician, Silverthorn, and A Darkness at Sethanon), Prince of the Blood, Faerie Tale and The King's Buccaneer. He is co-author (with Janny Wurts) of Daughter of the Empire, Servant of the Empire and Mistress of the Empire.
The Serpent War Saga (Shadow of a Dark Queen, Rise of a Merchant Prince, Rage of a Demon King and Shards of a Broken Crown) has continued his phenomenal success, and his epic new Riftwar series includes bestsellers Krondor: The Betrayal, Krondor: The Assassins and Krondor: Tear of the Gods.

GOR001502778
Murder in Lamut (Legends of the Riftwar, Book 2) by Raymond E. Feist
Raymond E. Feist
Legends of the Riftwar
Used - Very Good
Paperback
HarperCollins Publishers
2003-06-02
336
0006483895
9780006483892
N/A
Book picture is for illustrative purposes only, actual binding, cover or edition may vary.
This is a used book - there is no escaping the fact it has been read by someone else and it will show signs of wear and previous use. Overall we expect it to be in very good condition, but if you are not entirely satisfied please get in touch with us.