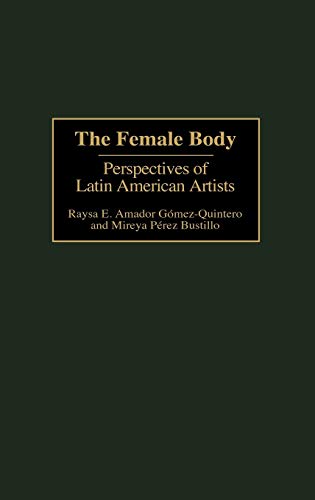 Including both narratives and visual texts by and about Latina women, Amador Gomez-Quintero and Perez Bustillo address the question of how women represent themselves.

Including both narratives and visual texts by and about Latina women, Amador Gomez-Quintero and Perez Bustillo address the question of how women represent themselves. Utilizing paintings, novels, photographs, memoirs, and diaries this work examines the depiction of the female body in 20th-century creative expression. From writers such as Julia Alvarez and Christina Garcia to artists including Frida Kahlo and Ana Mendieta, it provides both a broad outline and a finely detailed exploration of how a largely overlooked community of creative women have seen, drawn, photographed, and written about their own experience.

The authors discuss women as both agent and subject of artistic representation often comparing both fictional and nonfictional versions of the same woman. Not only do they analyze Elena Poniatowska's Dear Diego, which centers on artist Angelina Beloff, but they also analyze Beloff's own memoirs. Continuing in this style, they make further comparisons between Frida Kahlo's Diary and visual images of her body. Connections such as these are what make their work not merely an articulation of imagery but an explanation of ideas.

"Raysa Amador Gomez-Quintero and Mireya Perez Bustillo draw on an impressive body of critical theory to elucidate issues involving the female body. By exploring both visual and narrative sources, they construct a coherent notion of female self-figuration. Amador and Perez show how female artists, by delving into women's inner and physical worlds, move women from the margins to the center of both creative and historical space and, in the process, generate artistic innovation. The inclusion of illustrations greatly enriches the text. The Female Body is a well composed and well researched study; it is a welcome addition to the growing corpus of critical material on creative works by Latin American women."-Barbara Mujica Professor of Spanish Georgetown University author of Frida: A Novel
"The Female Body: Perspectives of Latin American Artists opens new boundaries in the exploration and construction of the Latina self. This book provides a deep analysis of the construction of the female body and female identity from a variety of perspectives and contexts. The book focuses on the different techniques of self-figuration or self-representation used by female discourses."-Dr. Antonio Sobejano-Mord'an Binghamton University

RAYSA E. AMADOR GOMEZ-QUINTERO, is an Associate Professor of Spanish Language and Literature, and Director of the Latin American Program at Adelphi University. She is the author of Una Aproximacion Historica a los Comentarios Reales.

MIREYA PEREZ BUSTILLO is an Associate Professor of Spanish at the College of New Rochelle, and a University Associate at New York University. She is the author of Carreras: Casos en la Comunidad and La Picara y la Dama.

Preface Introduction Constructing the Self: The "I" of the Novel: Elena Poniatowska's Quiela (Dear Diego), and Tina (Tinisima) Contrasting Selves: The Novel and the Memoir: Poniatowska's Dear Diego and Angelina Beloff's Memorias Transforming the Gaze: The "I" of the Camera: Tina Modotti's Photographs Dissecting the Self: Visual and Written Subjectivity: Frida Kahlo's Diary Inscribing the Body: Latina's Narrative and Visual Representation Works Cited Index

GOR010798567
The Female Body: Perspectives of Latin American Artists by Raysa E. Gomez-Quintero
Raysa E. Gomez-Quintero
Used - Well Read
Hardback
ABC-CLIO
2001-11-01
160
031331120X
9780313311208
N/A
Book picture is for illustrative purposes only, actual binding, cover or edition may vary.
This is a used book. We do our best to provide good quality books for you to read, but there is no escaping the fact that it has been owned and read by someone else previously. Therefore it will show signs of wear and may be an ex library book.