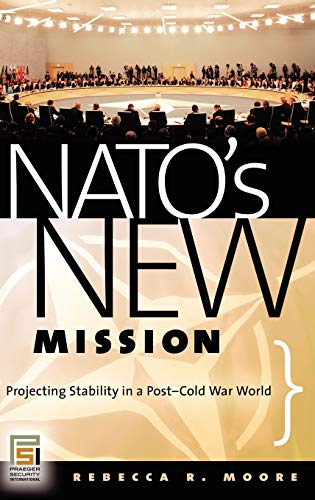 Out of Stock
$48.99
inc. GST
As Europe has become more unified and more democratic, NATO has assumed different layers of significance in the global security environment. This work argues that a careful analysis of NATO's global focus suggests that it is not the nature of NATO's mission that has changed, but rather its scope.
Very Good
Only 0 left

Reports of NATO's death have been greatly exaggerated. Characterizations of NATO as a relic of the past do not square with the fact that the Alliance is busier today than at any time in its history. As Europe has become more unified and more democratic, NATO has assumed new layers of significance in the global security environment. In a post-September 11 world, the old 1990s debate about what is in area and what is out of area is a luxury that the Alliance can no longer afford. Decisions made at the 2004 Istanbul summit aimed at enhancing NATO's partnerships with the states of Central Asia and extending the partnership concept to the Greater Middle East reflect the Alliance's new, more global presence as do new military missions in Afghanistan, Iraq, and Sudan.

Moore argues that a careful analysis of NATO's new, more global focus suggests that it's not the nature of NATO's mission that has changed, but rather its scope. NATO is approaching its new out of area missions with the political tools developed after the Soviet threat faded in the early 1990s when the Allies agreed that, rather than merely defend an old order, they would now create a new one grounded in liberal democratic values, including individual liberty and the rule of law. Indeed, the mission of projecting stability eastward was understood to be inextricable from the promotion of these values.

This new mission required that NATO devote greater attention to its political dimension. In fact, as the United States turned to promoting democracy around the world in the wake of September 11, it ultimately sought to enlist NATO in its mission of extending democracy beyond Europe to Central Asia and the Middle East. As Moore demonstrates in her attempt to provide a full and comprehensive understanding of the new NATO, while divisions within the Alliance persist as to just how global NATO should be, the post-September 11 security environment ensures that NATO's survival depends upon its willingness to project security beyond Europe. That mission will be as much political as it is military.

"Moore offers a detailed analysis of the North Atlantic Treaty Organization's continuing relevance in the post-Cold War world. Beginning with the demise of the Soviet Union, Moore details the dramatic transformation of the alliance from one based on collective defense to one whose contemporary mission is to extend stability far beyond its geographical boundaries. The book depicts NATO's relevance to a Europe whole and free and the tools adopted to become an agent of change. Through enlargement, NATO has acted as a tool for democracy promotion. Moore's examination does not dismiss the negative repercussions of US actions after September 11, including the controversy over Afghanistan and intervention in Iraq, but argues that the crisis in the alliance acted as a catalyst for NATO's ongoing attempt to redefine its strategic vision. Moore posits that measuring NATO's relevance solely based on military capabilities discounts the important political role it has played in extending stability beyond Europe. The question regarding how global NATO will become may be answered by whether its identity remains a western alliance or becomes a global alliance of democratic states. Highly recommended. Upper-division undergraduates through faculty." - Choice

Rebecca R. Moore is Associate Professor of Political Science at Concordia College in Moorhead, Minnesota, where she chairs the Global Studies program. She teaches courses in U.S. foreign policy, international relations, and international security and she has published previously on NATO, U.S. human rights policy, and the promotion of civil society in China. She held a NATO-EAPC Fellowship from 2001 to 2003.

GOR007050725
NATO's New Mission: Projecting Stability in a Post-Cold War World by Rebecca R. Moore
Rebecca R. Moore
Praeger Security International
Used - Very Good
Hardback
ABC-CLIO
2007-02-28
224
0275992969
9780275992965
N/A
Book picture is for illustrative purposes only, actual binding, cover or edition may vary.
This is a used book - there is no escaping the fact it has been read by someone else and it will show signs of wear and previous use. Overall we expect it to be in very good condition, but if you are not entirely satisfied please get in touch with us.