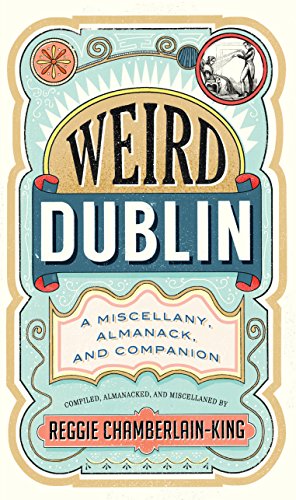 Used Price
$20.99
inc. GST
Free Shipping in Australia
A miscellany of dark materials spanning several centuries and showing the reader the strange, the occult, the lurid and the uncanny side of Dublin.
Very Good

Weird Dublin: A Miscellany, Almanack and Companion by Reggie Chamberlain-King

Did you ever hear tell of Ogilvy's Mourning Warehouse in Grafton Street? Or maybe your granny went to see Monsieur Chylinkski - the modern Hercules! - in the New Theatre Royal in Abbey Street? And did you know that the youngest person imprisoned in Kilmainham was just five years old? Welcome to the world of Weird Dublin, a miscellany that revels in the strange, extraordinary and uncanny side of Dublin. In this wonderful collection, you'll find mystic societies and graveside disturbances; madmen and medicine men; suicide, murder, and cannibalism. There are messages from the Beyond, magical conjurors and animal-magnetists, and for 'chronic conditions' there are iodides of arsenic and sulphur. Above all, you'll discover a quirky and compelling history of Dublin, drawn from newspaper reports, advertisements, hearsay, anecdote and rumour. This is the city you thought you knew at its shocking and scandalous best.

"Reggie Chamberlain-King has combed through some four centuries' worth of magazines, newspapers and books in order to assemble the most incredible cornucopia of criminal trials, medical misbeliefs and general bizarrities of human nature that happened to occur near the banks of the Liffey. It all adds up to time well-spent wherever it is read." -- Hubert O'Hearn
"Reggie Chamberlain-King has compiled a book which is humorous, occasionally shocking, spirited and always - yes - delightful." -- Hubert O'Hearn

Reggie Chamberlain-King quickly sped past youth and education into decrepit early adulthood, becoming, by cold hard luck, a writer, musician, and broadcaster. He makes frequent appearances on Radio Ulster's Arts Extra and was, for four years, the cultural attache on After Midnight with Stuart Bailie. He has written several plays, including The Ballad of Lilliburlero for BBC NI Events, and The Down Chorus, for Wireless Mystery Theatre. His work has appeared on BBC Radio 3 and Radio 4 and has been broadcast in Germany, Canada and the United States. He is a co-founder, actor, musician and continuity announcer with Wireless Mystery Theatre and author of the cult mystery series The Brittaine & Molloy Inquiry Quarterly. Weird Belfast is his first book. For more on Reggie Chamberlain-King visit http://thestuffedowl.co.uk/ Or follow him on Twitter @Reggie_C_King

GOR007756210
Weird Dublin: A Miscellany, Almanack and Companion by Reggie Chamberlain-King
Reggie Chamberlain-King
Used - Very Good
Hardback
Colourpoint Creative Ltd
2015-11-20
208
0856409537
9780856409530
N/A
Book picture is for illustrative purposes only, actual binding, cover or edition may vary.
This is a used book - there is no escaping the fact it has been read by someone else and it will show signs of wear and previous use. Overall we expect it to be in very good condition, but if you are not entirely satisfied please get in touch with us.