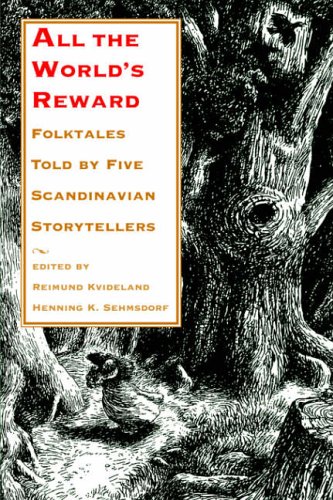 All the World's Reward
by Reimund Kvideland

In Stock
$74.99
inc. GST
Presents ninety-eight tales from Norway, Denmark, Sweden, Swedish-speaking Finland, and Iceland; each area is represented by the recorded repertoire of a single storyteller. This title places the stories in the context of the communities in which they were performed.
Very Good
Only 1 left

All the World's Reward Summary

All the World's Reward: Folktales Told by Five Scandinavian Storytellers by Reimund Kvideland

All the World's Reward presents ninety-eight tales from Norway, Denmark, Sweden, Swedish-speaking Finland, and Iceland. Each area is represented by the complete recorded repertoire of a single storyteller. Such a focus helps place the stories in the context of the communities in which they were performed and also reveals how individual folk artists used the medium of oral literature to make statements about their lives and their world. Some preferred jocular stories and others wonder tales; some performed mostly for adults, others for children; some used storytelling to criticize society, and others spun wish fulfillment tales to find relief from a harsh reality.

For the most part collected a century ago, the stories were gleaned from archives and printed sources; the Icelandic repertoire was collected on audiotape in the 1960s. Each repertoire was selected by a noted folklorist. Introductions to the storytellers and collectors and commentaries and references for the tales are provided. A general introduction, a comprehensive bibliography, and an index of the tales according to Aarne-Thompson's typology are also included. Period illustrations add charm to the stories.

All the World's Reward Reviews

[This book] will reward readers interested in Scandinavian folklore with beautifully presented texts, well-written introductions to the storytellers, and useful discussions of the historical context for folktale scholarship in Scandinavia.

GOR008022906
All the World's Reward: Folktales Told by Five Scandinavian Storytellers by Reimund Kvideland
Reimund Kvideland
Used - Very Good
Paperback
University of Washington Press
1999-05-01
344
029597754X
9780295977546
N/A
Book picture is for illustrative purposes only, actual binding, cover or edition may vary.
This is a used book - there is no escaping the fact it has been read by someone else and it will show signs of wear and previous use. Overall we expect it to be in very good condition, but if you are not entirely satisfied please get in touch with us.