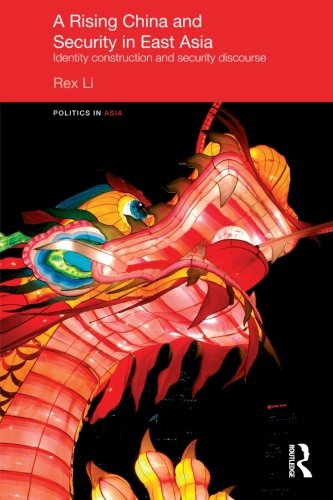 In Stock
$14.49
+10% GST
Presents an analysis of the security discourse of Chinese policy elites on the major powers in East Asia in relation to China's self-perception as a rising power. This book utilizes International Relations theories systematically to analyze Chinese security perceptions of the United States, Japan and Russia.
Very Good
Only 1 left

A Rising China and Security in East Asia Summary

This volume provides a comprehensive and in-depth analysis of the security discourse of Chinese policy elites on the major powers in East Asia in relation to China's self-perception as a rising power. It is the first book-length study that utilizes International Relations theories systematically to analyze Chinese security perceptions of the United States, Japan and Russia, and the debate among Chinese international relations specialists on how China should respond to the perceived challenge from the major powers to its rise to a global status.

Rex Li argues that the security discourse of Chinese policy analysts is closely linked to their conception of China's identity and their desire and endeavour to construct a great power identity for China. Drawing on extensive and up-to-date Chinese-language sources, the study demonstrates that Chinese elites perceive the power, aspirations and security strategies of other East Asian powers primarily in terms of their implications for China's pursuit of great power status. This new work will contribute significantly to the on-going academic and policy debate on the nature and repercussions of China's rise.

This book will be essential reading for undergraduate and postgraduate students and scholars of Asian security, China's foreign relations, security studies and international relations.

A Rising China and Security in East Asia Reviews

`[The book] brings necessary insights into the options that are being discussed in Beijing and into the extent to which leaders may be exposed to different points of view. ... the extant use of Chinese-language material matches the use of English-language material, giving access to the Chinese realm of policy-making to an extent that cannot be overestimated. This is an important book, which should be read by all those with an interest in Chinese foreign affairs and international security, among them undergraduate and postgraduate students, university teachers and practitioners.' - International Affairs (Vol. 85, No. 4, July 2009)

'China has interesting political debates, but much stricter limits on what can be said than in the democracies. Still, the country is abuzz with think-tanks and academics publishing on foreign policy, some of them increasingly influential with the ruling elite. Rex Li's book draws on their output to provide a useful overview of Chinese thinking about the world.' - Times Higher Education, October 2009

'Understanding Chinese foreign policy has been a challenge for analysts trained in Western international systems approaches and theories. Rising China provides a bridge between Chinese experts writing on their perception of the world and dominant Western theories on international relations. ... Now that China has become the world's fourth-largest economy, an analysis of security discourse is of critical importance. ... What makes the book particularly valuable is the dissection and summary of extensive Chinese literature on how China views events and the intentions of the US, Russia, and Japan. ... The book's main value is its comprehensive review of Chinese literature on perceptions of China in the East Asian region.' - The China Journal (No. 63, January 2010)

1. A Rising China, IR Theories and Chinese Security Discourse of East Asian Powers 2. Hegemonic Aspirations in a Unipolar World: US Security Strategy under the George Bush Snr and Bill Clinton Presidencies 3. September 11, Preemption and the Bush Doctrine: US Security Strategy under the George W. Bush Administration 4. Security, Identity and Strategic Choice: Japan's Quest for a Great Power Status 5. A Key Player in an Emerging Multipolar World: Russia and East Asian Security 6. China's Response to the Security Challenge of the Major Powers in East Asia: Identity Construction and Great Power Aspirations 7. Conclusion: Chinese Security Discourse and Its Implications for the Debate on the Rise of China

GOR001971251
A Rising China and Security in East Asia: Identity Construction and Security Discourse by Rex Li (Liverpool John Moores University, UK)
Rex Li (Liverpool John Moores University, UK)
Politics in Asia
Used - Very Good
Paperback
Taylor & Francis Ltd
2008-11-19
300
0415449413
9780415449410
N/A
Book picture is for illustrative purposes only, actual binding, cover or edition may vary.
This is a used book - there is no escaping the fact it has been read by someone else and it will show signs of wear and previous use. Overall we expect it to be in very good condition, but if you are not entirely satisfied please get in touch with us.