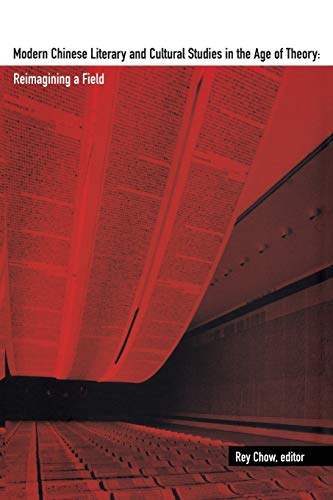 A collection of essays which use critical theory to reflect on issues pertaining to modern Chinese literature and culture. It addresses topics such as 20th-century literature produced in Taiwan, Hong Kong, and mainland China; film, art, history, popular culture, and literary and cultural criticism and the geographies of migration and diaspora.

Modern Chinese Literary and Cultural Studies in the Age of Theory: Reimagining a Field by Rey Chow

These groundbreaking essays use critical theory to reflect on issues pertaining to modern Chinese literature and culture and, in the process, transform the definition and conceptualization of the field of modern Chinese studies itself. The wide range of topics addressed by this international group of scholars includes twentieth-century literature produced in Taiwan, Hong Kong, and mainland China; film, art, history, popular culture, and literary and cultural criticism; as well as the geographies of migration and diaspora.

One of the volume's provocative suggestions is that the old model of area studies-an offshoot of U.S. Cold War strategy that found its anchorage in higher education-is no longer feasible for the diverse and multifaceted experiences that are articulated under the rubric of "Chineseness." As Rey Chow argues in her introduction, the notion of a monolithic Chineseness bound ultimately to mainland China is, in itself, highly problematic because it recognizes neither the material realities of ethnic minorities within China nor those of populations in places such as Tibet, Taiwan, and post-British Hong Kong. Above all, this book demonstrates that, as the terms of a chauvinistic sinocentrism become obsolete, the critical use of theory-particularly by younger China scholars whose enthusiasm for critical theory coincides with changes in China's political economy in recent years-will enable the emergence of fresh connections and insights that may have been at odds with previous interpretive convention.
Originally published as a special issue of the journal boundary 2, this collection includes two new essays and an afterword by Paul Bove that places its arguments in the context of contemporary cultural politics. It will have far-reaching implications for the study of modern China and will be of interest to scholars of theory and culture in general.

"Chow's vision has implications beyond the narrow realm that the title of this volume suggests to the unpacking of any monolithic identity and the contesting of any cultural locale in an increasingly globalized context. As such its appeal extends to comparatists in the widest sphere of literary and cultural studies."
--Hilary Chung, "The China Review"
"Rey Chow is perhaps the only scholar of Chinese cultural studies likely to be familiar to cultural studies and comparative literature scholars in general."
--Jason McGrath, "Bryn Mawr Review of Comparative Literature"

Rey Chow is Andrew W. Mellon Professor of the Humanities at Brown University. Her books include Woman and Chinese Modernity, Writing Diaspora, Primitive Passions, and Ethics after Idealism.

Acknowledgments vii
Introduction: On Chineseness as a Theoretical Problem / Rey Chow 1
Narrative Subjectivity and the Production of Social Space in Chinese Reportage / Charles A. Laughlin 26
Three Hungry Women / David Der-wei Wang 48
Two Discourses on Colonialism: Huang Guliu and Eileen Chang on Hong Kong of the Forties / Leung Ping-Kwan 78
Beyond Cultural and National Identities: Current Re-evaluation of the Kominka Literature from Taiwan's Japanese Period / Sung-sheng Yvonne Chang 99
Wang Wenxing and the "Loss" of China / Christopher Lupke 127
If China Can Say No, Can China Make Movies? Or, Do Moves Make China? Rethinking National Cinema and National Agency / Chris Berry 159
Look Who's Talking: The Politics of Orality in Transitional Hong Kong Mass Culture / Kwai-Cheung Lo 181
Bondage in Time: Footbinding and Fashion Theory / Dorothy Ko 199
No Questions, No Answers: China and A Book from the Sky / Stanley K. Abe 227
International Theory and the Transnational Critic: China in the Age of Multiculturalism / Michelle Yeh 251
Can One Say No to Chineseness: Pushing the Limits of the Diasporic Paradigm / Ien Ang 281
Afterword: The Possibilities of Abandonment / Paul A. Bove 301
Index 317
Contributors 325
GOR011054582
9780822325970
0822325977
Modern Chinese Literary and Cultural Studies in the Age of Theory: Reimagining a Field by Rey Chow
Rey Chow
Asia-Pacific: Culture, Politics, and Society
Used - Like New
Paperback
Duke University Press
2001-01-01
336
N/A
Book picture is for illustrative purposes only, actual binding, cover or edition may vary.
The book has been read, but looks new. The book cover has no visible wear, and the dust jacket is included if applicable. No missing or damaged pages, no tears, possible very minimal creasing, no underlining or highlighting of text, and no writing in the margins
Trustpilot