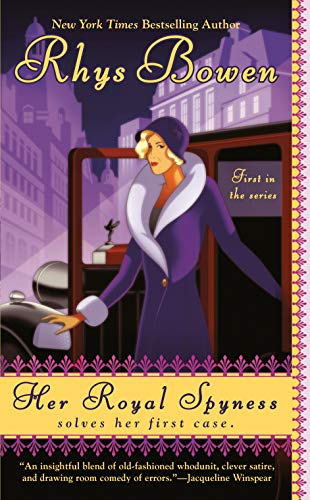 Her Royal Spyness
by Rhys Bowen

Out of Stock
$33.99
inc. GST
The Agatha Award winner debuts a 1930s London mystery series, featuring a penniless member of the extended royal family. When an arrogant Frenchman, who wants her family's estate for himself, winds up dead, Victoria's most important job is to clear her family name.
Very Good
Only 0 left

Her Royal Spyness by Rhys Bowen

The New York Times bestselling author of the Molly Murphy and Constable Evan Evans mysteries turns her attentions to "a feisty new heroine to delight a legion of Anglophile readers."*

London, 1932. Lady Victoria Georgiana Charlotte Eugenie, 34th in line for the English throne, is flat broke. She's bolted Scotland, her greedy brother, and her fish-faced betrothed. London is a place where she'll experience freedom, learn life lessons aplenty, do a bit of spying for HRH--oh, and find a dead Frenchman in her tub. Now her new job is to clear her long family name...

"Fans of P.G. Wodehouse looking for laughs mingled with some amateur sleuthing will be quite pleased."--Publishers Weekly (starred review)

Rhys Bowen, a New York Times bestselling author, has been nominated for every major award in mystery writing, including the Edgar(R), and has won many, including both the Agatha and Anthony awards. She is the author of the Royal Spyness Mysteries, set in 1930s London, the Molly Murphy Mysteries, set in turn-of-the-century New York, and the Constable Evans Mysteries, set in Wales. She was born in England and now divides her time between Northern California and Arizona.

GOR001712106
Her Royal Spyness by Rhys Bowen
Rhys Bowen
Royal Spyness Mystery
Used - Very Good
Paperback
Unknown
0
0425222527
9780425222522
N/A
Book picture is for illustrative purposes only, actual binding, cover or edition may vary.
This is a used book - there is no escaping the fact it has been read by someone else and it will show signs of wear and previous use. Overall we expect it to be in very good condition, but if you are not entirely satisfied please get in touch with us.