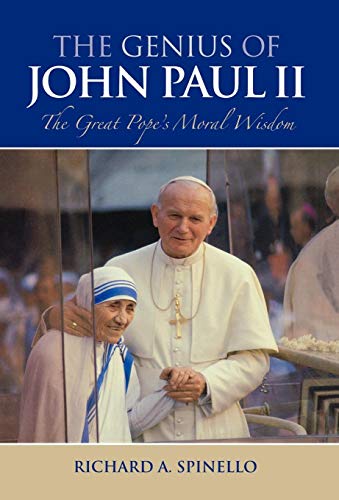 The Genius of John Paul II
by Richard A. Spinello

The Genius of John Paul II: The Great Pope's Moral Wisdom by Richard A. Spinello

In this exciting new book, renowned ethicist Richard Spinello offers the first comprehensive presentation of the late John Paul II's great moral vision. Here admirers may read and understand the essential teachings of the pope in his own words as Spinello draws on his extensive research into John Paul II's writings and talks. Subjects covered include reverence for life, concern for the poor and suffering, moral law, conscience, moral choice, intrinsically evil acts, freedom, and goodness. The purpose of this book is two-fold: it not only persuasively presents the late pope's vital teachings, but also defends them against his critics. This important new work preserves and promotes the extraordinary legacy of John Paul II by focusing on his championing of universal human dignity and objective moral truths.

Drawing on a vast body of materials, Dr. Spinello succeeds in lucidly synthesizing the moral teaching of Pope John Paul II. More than this, he puts that teaching in context, contrasting it with the views of other moral theologians, including some who criticize the pope. The book thus serves as a very informative survey of current debates in Catholic moral theory. -- Cardinal Avery Dulles S.J., Lawrence J. McGinley Professor of Religion and Society, Fordham University
In presenting excerpts from encyclicals such as Veritatis splendor (The Splendor of Truth), Spinello is able to distinguish moral theology from moral philosophy. John Paul believed in the ontological goodness of all creation, and from that basis comes his truth. Recommended for religious studies and scholarly collections. * Library Journal *
The Genius of John Paul II truly gave me a greater understanding of the writings of Pope John Paul II and I am glad to say I came away both more knowledgeable and with a even greater appreciation of a Pope I so dearly loved...This book is highly recommended. -- Jeff Miller, The Curt Jester (www.splendoroftruth.com/curtjester)
This will be an excellent book for students of Religious Studies. -- Florence Waszkelewicz Clowes * Polish American Journal, May 2007 *

About Richard A. Spinello

Richard A. Spinello is director of Ethics Programs for the Carroll School of Management at Boston College. He lives in Hyde Park, Massachusetts.

GOR010862217
The Genius of John Paul II: The Great Pope's Moral Wisdom by Richard A. Spinello
Richard A. Spinello
Used - Like New
Hardback
Rowman & Littlefield
2006-11-08
224
1580512062
9781580512060
N/A
Book picture is for illustrative purposes only, actual binding, cover or edition may vary.
The book has been read, but looks new. The book cover has no visible wear, and the dust jacket is included if applicable. No missing or damaged pages, no tears, possible very minimal creasing, no underlining or highlighting of text, and no writing in the margins.