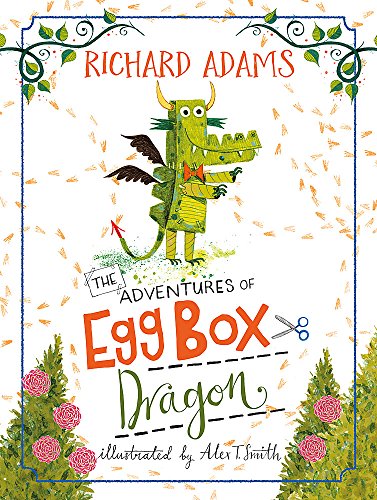 The Adventures of Egg Box Dragon
by Richard Adams

The Adventures of Egg Box Dragon by Richard Adams

From the author of Watership Down, Richard Adams, comes an enchanting picture book about the adventures of a mischievous homemade dragon. Illustrated by Alex T. Smith, creator of Claude, the bestselling beret-clad canine hero.

Whatever you've lost, Egg Box Dragon will find it. He's retrieved missing footballs, glasses and watches aplenty. He's so expert at cracking mysteries that the Queen herself requests his services. Will Egg Box Dragon find the missing diamond from the Queen's crown?

Richard Adams was awarded both the Carnegie Medal and the Guardian Award for children's fiction. Watership Down has sold over 50 million copies. A new mini series of Watership Down will premiere Christmas 2017 on BBC1 and launch globally on Netflix Spring 2018, featuring the voices of Olivia Colman and Freddie Fox, amongst others.

A lovely story with an unexpected twist in the tale * Parents in Touch *
A cheeky dragon with boxes of charm and likeability! * Inis *
This is a lovely story which has been given a new lease of life by the gorgeous, funny illustrations of Alex T. Smith. I absolutely loved it. * Making Them Readers *
playful and uplifting - it may not be long before some Egg Box Dragons start appearing in your vicinity! * Armadillo Magazine *
A beautifully illustrated, wonderfully old-fashioned story. * The School Run *
A disarmingly pleasing book which invites readers to suspend their disbelief and simply enjoy the story telling. * The School Librarian *
A bright, vivid children's book, with wonderful illustrations, that new readers will love. * The Carousel *
A cute story about a very lovable dragon, with adorable illustrations by Alex T Smith. * Parents in Touch *

Richard Adams was born in Berkshire in 1920 and studied history at Bradfield and Worcester College, Oxford. He served in the Second World War and in 1948 joined the Civil Service. In the mid-sixties he completed his first novel, Watership Down, the story of which he originally told to his children to while away a long car journey. Watership Down was awarded both the Carnegie Medal and the Guardian award for children's fiction for 1972.

Author-illustrator Alex T. Smith is the award-winning creator of the bestselling Claude series, which is published in 16 languages worldwide, and begins airing as a TV show on Disney Junior in 2018. Alex's newest series, Mr Penguin, launched in 2017, to widespread praise. Alex's quirky, witty writing and illustrations are instantly recognisable, critically-acclaimed and as popular with adults as children. Alex is also widely-praised for his work illustrating children's classics: he won Children's Book of the World Illustration Award 2016 for his illustrations in a new edition of Dodie Smith's The Hundred and One Dalmatians; he has created new art for books by Enid Blyton, Eva Ibbotson and Richmal Crompton. Alex has collaborated with Watership Down author Richard Adams on his last book, Egg Box Dragon, as well as David Almond, and Juno Dawson. Alex has won the UKLA Picture Book Award and the Sainsbury's Children's Book Award, and been shortlisted for the Waterstones Children's Book Award. He was the official World Book Day illustrator in 2014.

GOR010799092
The Adventures of Egg Box Dragon by Richard Adams
Richard Adams
Used - Well Read
Hardback
Hachette Children's Group
2017-10-05
32
1444938401
9781444938401
N/A
Book picture is for illustrative purposes only, actual binding, cover or edition may vary.
This is a used book. We do our best to provide good quality books for you to read, but there is no escaping the fact that it has been owned and read by someone else previously. Therefore it will show signs of wear and may be an ex library book.