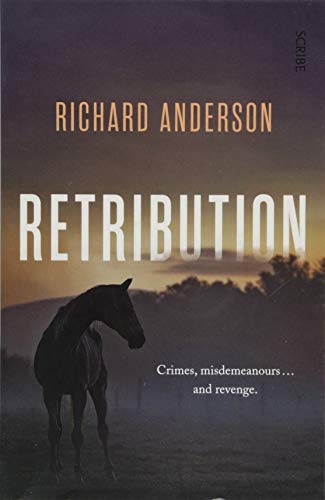 A story about finding out how to survive and surviving what you find.

In a small town deep in rural Australia, an act of revenge causes five lives to collide. Luke is an environmental protestor who isn't what he seems, while cattle thief Sweetapple longs for a more honourable life. Washed-up local politician Caroline Statham is searching for a sense of purpose, but her businessman husband seems to be sliding into corruption. And then there's Carson: wild, bound to no one, and determined to escape her circumstances.

Into their midst comes Retribution, a legendary horse worth a fortune. Her disappearance triggers a cycle of violence and retaliation that threatens the whole community. As tensions build, they must answer one question: is true retribution ever possible - or even desirable?

'Captivating, incredibly well-written ... Retribution is a ripping thriller, deeply Australian, and an absolute must-read for all crime fans.'

'This powerful novel has thrills and emotions to spare ... the evocation of dust and heat all come together for a tense tale of human emotions at their rawest. A genuine discovery and a unique voice.'

'This book is fluently written around a story that is set squarely in the world that Anderson knows so well ... Richard Anderson is a good writer and a good observer of human behaviour.'

'If you like your crime hot, gritty and dusty then this gem, set in rural Australia, is for you ... A fine tale that'll have you sweating with its heat and intensity.'

'[A] slow-burning thriller that reads like a neo-Western ... vividly captures the vast, rugged landscape and the brutal intensity of the heat in the back country.'

'Richard Anderson is ... a fine writer ... In lucid, unflashy prose, he relates how the theft of a priceless mare, Retribution, results in a human pile-up for five utterly believable characters, good, bad and ugly.'

'Retribution is a good one, different, unusual and a refreshing twist on crime fiction as a whole ... Elegantly written, beautifully evocative of the sense of place, and people in it, Richard Anderson knows that of which he writes.'

'A lovely elegiac book about a horse and an unlikely love affair between a couple of lonely misfits ... the book is a triumph of the very best kind of gritty Aussie writing.'

Richard Anderson is a second-generation farmer from northern New South Wales. He has been running a beef-cattle farm for twenty-five years, but has also worked as a miner and had a stint on the local council. Richard is the author of two rural-crime novels, Retribution and Boxed, both published by Scribe. He lives with his wife, four dogs, and a cat.

GOR009297377
Retribution by Richard Anderson
Richard Anderson
Used - Very Good
Paperback
Scribe Publications
2018-08-09
336
1911617702
9781911617709
N/A
Book picture is for illustrative purposes only, actual binding, cover or edition may vary.
This is a used book - there is no escaping the fact it has been read by someone else and it will show signs of wear and previous use. Overall we expect it to be in very good condition, but if you are not entirely satisfied please get in touch with us.