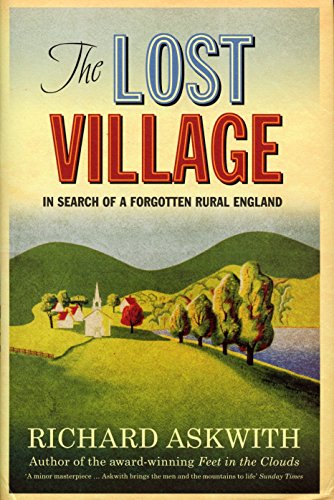 The Lost Village
by Richard Askwith

In Stock
$22.99
inc. GST
The idea of the village - unspoilt, unpretentious, unchanging and growing almost organically out of the landscape - is one of the most potent in the English imagination.
Very Good
5 in stock

The Lost Village: In Search of a Forgotten Rural England by Richard Askwith

The idea of the village - unspoilt, unpretentious, unchanging and growing almost organically out of the landscape - is one of the most potent in the English imagination. Writers, artists and ordinary people have waxed lyrical on the theme for centuries, while today millions have left the cities in search of the rural idyll. Yet the village is plainly dying. The unchanging rhythms of village life, as experienced with little variations by generations, have vanished. But not without trace ... they exist in living memory. In the voices of men and women for whom the old ways were life-shaping realities. Richard Askwith, an award-winning writer and journalist, describes a journey in search of the quintessential English village, through dales and suburbs, down ancient lanes and estates. He captures the voices of poachers and gamekeepers, farmers and hunters, nurses and postmen, teachers and craftsmen, and demonstrates that, while the landscape more changed than we thought, the past is never so simple as we imagine.

"A quest, both funny and sad, for the remnants of English country life" * Culture, The Sunday Times *
"a penetrating look at eh state of rural England in the early 21st century...unsentimental about the past and unpersuaded by the present's superficiality" * BBC Who Do You Think You Are magazine *
"Thought-provoking and highly readable" * BBC Homes & Antiques *
"A gentle book, a search for something no longer there, as perhaps it never had been" * The Spectator *
"[Askwith] succeeds handsomely, ferreting out a remarkable array of old-timers...their disappearing world captured vividly" * Culture, The Sunday Times *

Richard Askwith has been a journalist for more than 35 years. For the past 15 years he has been Associate Editor of the Independent. His first book, Feet in the Clouds, won Best New Writer at the British Sports Book Awards and the Bill Rollinson Prize for Landscape and Tradition. It was shortlisted for the William Hill and Boardman-Tasker prizes and was named by Runner's World as one of the three best running books of all time. His 2014 book, Running Free, was short-listed for the Thwaites-Wainwright Prize.

GOR001219465
The Lost Village: In Search of a Forgotten Rural England by Richard Askwith
Richard Askwith
Used - Very Good
Hardback
Ebury Publishing
2007-03-01
368
0091909139
9780091909130
N/A
Book picture is for illustrative purposes only, actual binding, cover or edition may vary.
This is a used book - there is no escaping the fact it has been read by someone else and it will show signs of wear and previous use. Overall we expect it to be in very good condition, but if you are not entirely satisfied please get in touch with us.