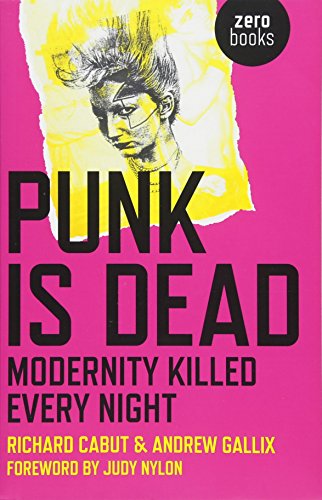 Punk is Dead
by Richard Cabut

Used Price
34,99 $
inc. GST
Free Shipping in Australia
An anthology featuring the most astute commentators and participants of the underground rise of punk, in this nuanced portrait of the era.
Very Good

Punk is Dead by Richard Cabut

This original collection of insight, analysis and conversation charts the course of punk from its underground origins, when it was an un-formed and utterly alluring near-secret, through its rapid development. Punk is Dead: Modernity Killed Every Night takes in sex, style, politics and philosophy, filtered through punk experience, while believing in the ruins of memory, to explore a past whose essence is always elusive.

"I thoroughly enjoyed Punk is Dead: Modernity Killed Every Night (Zero Books). Edited by Richard Cabut and Andrew Gallix, this anthology of essays, interviews and personal recollections reflects on the ways in which punk was lived and experienced at the time. Gallix flips his finger at those who see nostalgia as an affliction and rightly attempts to promote the fragmented and contested legend of punk to "a summation of all the avant-garde movements of the 20th century . . . a revolution for everyday life" Deborah Levy has chosen Punk is Dead as one of her books of the year in the New Statesman--Deborah Levy, Booker Prize-shortlisted novelist "New Statesman "
This is a well-selected collection of essays about punk and its cultural impact, which mixes contemporary accounts with more academic reflective approaches (sometimes in the same chapter). This means it's quite uneven but that seems appropriate given its subject. You do come away with some kind of feel how exciting it must have been to be involved in what was happening in 1976 and 1977 and how quickly the excitement seems to have dissipated. A good companion to books like Jon Savage's England's Dreaming.--Michael J "Netgalley "
The specific purpose of the book is to celebrate that original evanescent wellspring of creativity when punk emerged as a "stylish boho response to the modern world of inertia and consumption" and retained the "innocence characteristic of childhood" of a movement yet to be frozen by being named or sullied by exposure to popular vitriol and acclaim alike.--Colin Coulter "The Irish Times "
Composed of essays, interviews, memoirs and manifestos by veterans of London's punk scene, Richard Cabut and Andrew Gallix's Punk is Dead is a nostalgic, intelligent homage to the brief, hazy era of "pure" London punk, before it was named, over-described and turned into another sub-cultural phenomenon. This golden age lasted somewhere between four and eighteen months, depending on who's recollecting, although most agree that by 1978, it was over. . . . A yearning for its own prelapsarian state was built into punk's ethos. As the punk musician-turned-philosopher Simon Critchley tells Gallix, "Because of the acute awareness of the fact that punk . . . would become a creature of the very music industry whose codes it subverted, we knew that it was going to be shortlived. And that was fine" The book is also a homage to youth and lost possibilities. In her foreword, Judy Nylon (formerly Niland) describes arriving in London in 1970 with an overnight bag and $250, wearing jean shorts and a black Borganza coat. . . . "Bands are necessarily approximations of the dreams that conjured them up," Gallix writes in his essay "Unheard Melodies." Punk is Dead shows the transmission of culture as a kind of lucid group dreaming. The accounts of its contributors capture the role that coincidence plays in history. Ideas can rarely be traced back to one person; they accrete and recur. . . . Gallix is eloquent in his defence of nostalgia against the cult of an amnesiac future. Punk might be not only the last great subculture in the rock and roll mode, but the most analysed and documented. Nevertheless, art and cultural histories are always reductive, and, as he writes, "the past is subtly rewritten, every nuance gradually airbrushed out of the picture." Some of the contributors to Punk is Dead are professional writers and critics, although most of them are not. Cumulatively, their contributions evoke the texture, meaning and sensation of being young four decades ago in a now-unimaginably derelict London. They recall the smell of new vinyl records, beer, cigarettes and hair dye; the pointless squabbles with band mates; the composition of outfits; the eruption of street fights; the sweet taste of cherries picked outside a squat; and the ubiquitous brown packets of speed. . . . Some of the pieces are historical documents, while others appear for the first time in this anthology. Together, they capture the collective soul of an era.--Chris Kraus "Times Literary Supplement "
The book's title (Modernity Killed Every Night) quotes Jacques Vach , friend to the surrealist Andr Breton. But Punk Is Dead isn't end-to-end cultural theory; there's a lot on clothes. Three strands unfurl - papers, essays and first-person accounts. Cabut and Gallix have included historical documents - such as Penny Rimbaud's 1977 essay, Banned from the Roxy, newly annotated by the Crass drummer - while Gallix argues that punk started ending when it acquired a name. Jon Savage is here, and Ted Polhemus and Vermorel. (...) As an interview with the punk turned philosopher Simon Critchley attests, punk unleashed ideas. It palpably changed suburban teenage futures, rather than ending them.--Kitty Empire "The Observer "

Andrew Gallix has lectured at the Sorbonne University in Paris since 1992. In 2000, he launched one of the first literary webzines, 3:AM Magazine, for which he is Editor-in-Chief. He lives near Paris, France.

GOR010754424
Punk is Dead by Richard Cabut
Richard Cabut
Used - Very Good
Paperback
John Hunt Publishing
2017-10-01
336
1785353462
9781785353468
N/A
Book picture is for illustrative purposes only, actual binding, cover or edition may vary.
This is a used book - there is no escaping the fact it has been read by someone else and it will show signs of wear and previous use. Overall we expect it to be in very good condition, but if you are not entirely satisfied please get in touch with us.