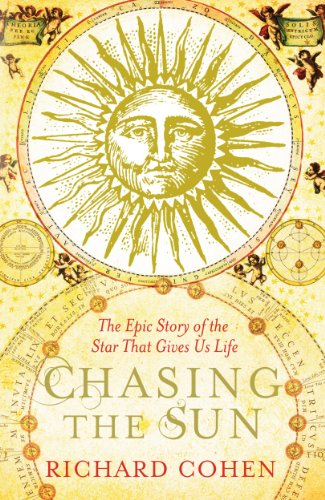 Chasing the Sun by Richard Cohen

Adazzling tour d'horizonof mankind's enduring fascination with, and reliance upon, the extraordinary star at the centre of our solar system.

Chasing the Sun: The Epic Story of the Star That Gives us Life by Richard Cohen

The Sun is so powerful, so much bigger than us, that it is a terrifying subject. Yet though we depend on it, we take it for granted. Amazingly the first book of its kind, CHASING THE SUNis a cultural and scientific history of our relationship with the star that gives us life.

Richard Cohen, applying the same mix of wide-ranging reference and intimate detail that won outstanding reviews for By the Sword, travels from the ancient Greek astronomers to modern-day solar scientists, from Stonehenge to Antarctica (site of the solar eclipse of 2003, when penguins were said to sing), Mexico's Aztecs to the Norwegian city of Tromso, where for two months of the year there is no Sun at all. He introduces us to the crucial 'sunspot cycle' in modern economics, the religious dances of Indian tribesmen, the histories of sundials and calendars, the plight of migrating birds, the latest theories of global warming, and Galileo recording his discoveries in code, for fear of persecution.

And throughout, there is the rich Sun literature -- from the writings of Homer through Dante and Nietzsche to Keats, Shelley and beyond. Blindingly impressive and hugely readable, this is a tour de force of narrative non-fiction.
Richard Cohen is the former publishing director of Hutchinson and Hodder & Stoughton and the author of Chasing the Sun, By the Sword, and How To Write Like Tolstoy. Works he has edited have gone on to win the Pulitzer, Booker and Whitbread/Costa prizes, and twenty-one have been #1 bestsellers. For more than 35 years he has written, edited, and lectured on numerous subjects around the world, from talks on the Queen Mary 2 to the First World War battlefields of France and Belgium. For seven years he was a visiting professor in creative writing at the university of Kingston-upon-Thames in London. Among the authors he has edited are Madeleine Albright, Vanessa Redgrave, Sebastian Faulks, Studs Terkel, John Keegan, Richard Holmes, John le Carre, Jeffrey Archer, Sir Harold Evans, Tony Benn, Barbara Castle, William Trevor, Kingsley Amis and Fay Weldon. He is a Fellow of the Royal Society of Literature. For two years he was program director of the Cheltenham Festival of Literature, and during his tenure it became the largest book festival in the world. Five times U.K. national saber champion, Cohen was selected for the British Olympic fencing team in 1972, 1976, 1980, and 1984 and has been four times world veteran champion. He has written for the New York Times, the Wall Street Journal, the New York Times Book Review and most British quality newspapers.
GOR002995117
9780743259286
0743259289
Chasing the Sun: The Epic Story of the Star That Gives us Life by Richard Cohen
Richard Cohen
Used - Very Good
Hardback
Simon & Schuster
2010-11-01
704
N/A
Book picture is for illustrative purposes only, actual binding, cover or edition may vary.
This is a used book - there is no escaping the fact it has been read by someone else and it will show signs of wear and previous use. Overall we expect it to be in very good condition, but if you are not entirely satisfied please get in touch with us
Trustpilot