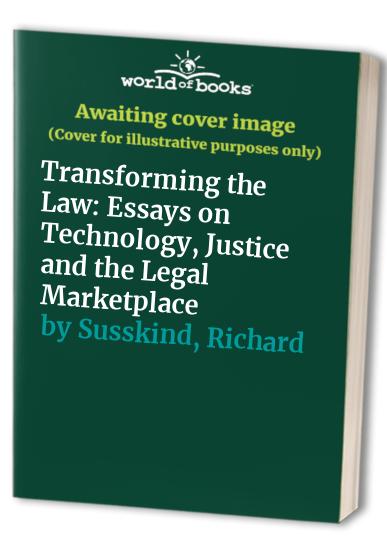 In Stock
$13.49
+10% GST
This is the latest book from law and technology guru Richard Susskind, author of best-selling The Future of Law, bringing together in one volume eleven significant essays on the application of IT to legal practice and the administration of justice, including Susskind's very latest thinking on key topics such as knowledge management and the impact of electronic commerce and electronic government.
Very Good
Only 4 left

Transforming the Law: Essays on Technology, Justice and the Legal Marketplace by Richard E. Susskind, OBE

Richard Susskind is one of the world's leading experts on the application of information technology in the legal field, and an independent consultant to the government, private sector law firms and industry. His previous books, Expert Systems in Law (OUP, 1987) and The Future of Law (OUP, 1996), have both served to set the agenda for the serious discussion of the subject. This new volume features major new essays that analyse where the legal marketplace and community has now got to in applying and responding to the new technological possibilities, and examines the key issues that must now be tackled (in particular knowledge management and electronic commerce). It also includes eleven of Richard Susskind's most important past essays, on the legal application of IT, each updated to make clear their continued relevance to law and justice today.

The most important and useful book I have ever read about technology's impact on lawyers ... I give Transforming the Law the highest recommendation. It is a must-read for firm partners and others responsible for making strategic decisions about law and technology, including lawyers concerned about their future in the profession. * Jerry Lawson, Law Practice Management (and author of The Complete Internet Handbook for Lawyers) *
I would recommend this book to anyone interested in thinking about the changes that are being wrought by information technology in the law and courts arena. * Herbert M. Kritzer, The Law and Politics Book Review *

Professor Richard Susskind OBE FRSE DPhil LIB FBCS is one of the leading experts in the application of IT to law. He has specialized in that field for nineteen years and, since 1997, has been an independent adviser to various parts of government and for large private sector firms and companies. He lectures and consults internationally. He is past chairman of the Society for Computers and Law (1990-92), was Lord Woolf's IT Adviser during the Access to Justice Inquiry (1995-96), and was appointed IT Adviser to the Lord Chief Justice in 1998. Since 1990, he has been Visiting Professor to the Centre for Law, Computers and Technology, at Strathclyde University. In 1999, he was appointed by the Cabinet Office to the Modernising Government Project Board. In the Christmas Honours his services to Legal Justice were acknowledged with an OBE. He has published two of his four books with OUP, see below. And has been General Editor of The International Journal for Law and Information Technology

PART I: LEGAL SERVICE IN THE NEW ECONOMY; PART II: THE FUTURE OF LAW; PART III: EXPERT SYSTEMS IN LAW; PART IV: IT IN THE JUSTICE SYSTEM

GOR001943450
Transforming the Law: Essays on Technology, Justice and the Legal Marketplace by Richard E. Susskind, OBE
Richard E. Susskind, OBE
Used - Very Good
Hardback
Oxford University Press
2000-12-21
316
0198299222
9780198299226
N/A
Book picture is for illustrative purposes only, actual binding, cover or edition may vary.
This is a used book - there is no escaping the fact it has been read by someone else and it will show signs of wear and previous use. Overall we expect it to be in very good condition, but if you are not entirely satisfied please get in touch with us.