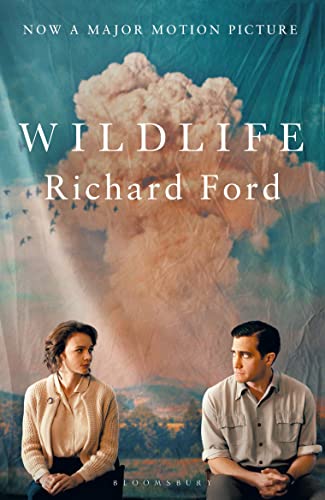 Now a critically acclaimed film starring Jake Gyllenhaal and Carey Mulligan, co-written by Paul Dano and Zoe Kazan, and directed by Paul Dano The setting is Great Falls, Montana, where the Rockies end and where, in 1960, the promise of good times seems as limitless as the sweep of the prairies beyond. This is where the Brinson family hopes to find a better life. Instead, sixteen-year-old Joe Brinson watches his parents discover the limits of their marriage and, at the same time, the unexpected depths of dignity and courage that remain even when love dies.
Praise for Wildlife (2018): Superb ... Has an emotional richness and subtlety you simply don't find in most movies * Independent *
A satisfying drama of damaged lives * Guardian *
Measured, diligent, exacting ... with a melancholy beauty * Daily Telegraph *
Captivating ... Adapted from Richard Ford's novel by Dano and his partner and fellow actor, Zoe Kazan, Wildlife is both bleak and hopeful, revealing how families hurt each other, and how they survive * New Statesman *
Rich and unexpected ... Adapted by Dano and his partner, Zoe Kazan, from a Richard Ford novel, Wildlife is ostensibly about the break-up of a marriage, but really it's about the end of childhood * Sunday Times *
Superb ... A domestic drama both sad and terrifying ... Remarkable * New York Times *
Wildlife soars in stillness ... A marriage crumbles, largely in a silent stillness. We watch in the same way. That's exactly how it should be ... A quiet stunner * Washington Post *
Lovely and studied ... There's muted, dreamy poeticism at work, with an aching polish, a sombre beauty thatrichly underscores all the angst * Vanity Fair *
A rivetingly good, human journey, full of sparks, flame, smoke, containment, ash, and the terrible beauty that sometimes mystifyingly colors stories of desolation * The Wrap *
Confident and compassionate * Slate *
Beautifully nuanced ... a portrait of a woman who can't quite catch up with the frustration and feminist stirrings she feels inside ... Timelessly urgent and thrillingly alive * Rolling Stone *
Resonant and absorbing ... It goes back to Richard Ford's writing, which is suggestive and metaphorical in an amorphous way. (It's like Raymond Carver with a deliberately blurred lens) * Variety *
The book reminded me, first of all, of my parents, my grandparents. There was something of them in there. There was also something both personal and archetypal in there. I was really intoxicated by that idea. The mystery of who our parents are. As kids crossing over the threshold to adulthood and having a certain amount of access to different parts of the adult world, our parents can seem different. I think these people have been good parents until now. But they have not been living in the present; they've instead been living an idea of what their life was supposed to me. There's an element of `the American dream' in there that I love. And what happens when you realise that you're not going to get there -- Paul Dano, director of Wildlife
Praise for Richard Ford's Wildlife: Hemingway updated and outwritten by a bleak but kindly master of simple words that speak volumes * Mail on Sunday *
Every sentence Ford writes, illuminates. He makes you understand what life is like for people whose daily expectation is that their smallest hopes will be snatched away from them. His prose is strong, clear and satisfying * Sunday Times *
Among the very best American fiction is that of Richard Ford, who with only three novels and a volume of short stories, has established himself as a writer whose voice illuminates the lives of people who live at the very edge of society ... A special delight in all Ford's writing is the muscular poetry of his prose * Independent *
Wildlife is a fine novel by a fine writer. At times it brought to mind David Byrne's movie about another American Nowheresville, True Stories, a movie which, like Ford's book, observes the human animal with friendship, understanding and an almost clinical detachment * Independent on Sunday *
Powerful and haunting * Boston Globe *
A concise and moving story ... One comes away from this brief novel surprised by the depth of the author's achievement * London Review of Books *
Among the very best American fiction * Independent *
Richard Ford was born in Jackson, Mississippi. He has published eight novels and four collections of stories, including The Sportswriter, Independence Day, The Lay of the Land and the New York Times bestseller, Canada. Independence Day was awarded the Pulitzer Prize and the PEN/Faulkner Award for Fiction, the first time the same book had won both prizes. Let Me Be Frank with You was shortlisted for the Pulitzer Prize in 2015. His work has been translated into twenty-eight languages, and most recently was awarded the Prix Femina Etranger in France and the Princess of Asturias Prize for Literature in Spain. Richard Ford lives in Maine with his wife.
GOR009574626
9781526611741
1526611740
Wildlife: Film tie-in by Richard Ford
Richard Ford
Used - Very Good
Paperback
Bloomsbury Publishing PLC
2018-11-08
176
N/A
Book picture is for illustrative purposes only, actual binding, cover or edition may vary.
This is a used book - there is no escaping the fact it has been read by someone else and it will show signs of wear and previous use. Overall we expect it to be in very good condition, but if you are not entirely satisfied please get in touch with us
Trustpilot