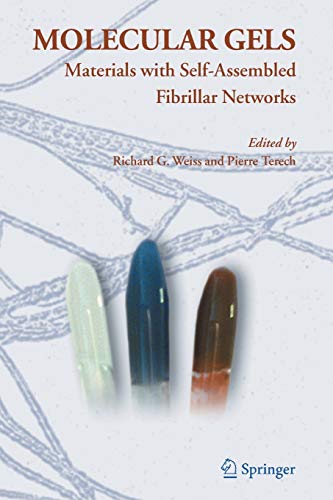 "Molecular Gels: Materials with Self-Assembled Fibrillar Networks" is a comprehensive treatise on gelators, especially low molecular-mass gelators and the properties of their gels.

"Molecular Gels: Materials with Self-Assembled Fibrillar Networks" is a comprehensive treatise on gelators, especially low molecular-mass gelators and the properties of their gels. The structures and modes of formation of the self-assembled fibrillar networks (SAFINs) that immobilize the liquid components of the gels are discussed experimentally and theoretically. The spectroscopic, rheological, and structural features of the different classes of low molecular-mass gelators are also presented. Many examples of the application of the principal analytical techniques for investigation of molecular gels (including SANS, SAXS, WAXS, UV-vis absorption, fluorescence and CD spectroscopies, scanning electron, transmission electron and optical microscopies, and molecular modeling) are presented didactically and in-depth, as are several of the theories of the stages of aggregation of individual low molecular-mass gelator molecules leading to SAFINs. Several actual and potential applications of molecular gels in disparate fields (from silicate replication of nanostructures to art conservation) are described. Special emphasis is placed on perspectives for future developments.

This book is an invaluable resource for researchers and practitioners either already researching self-assembly and soft matter or new to the area. Those who will find the book useful include chemists, engineers, spectroscopists, physicists, biologists, theoreticians, and materials scientists.