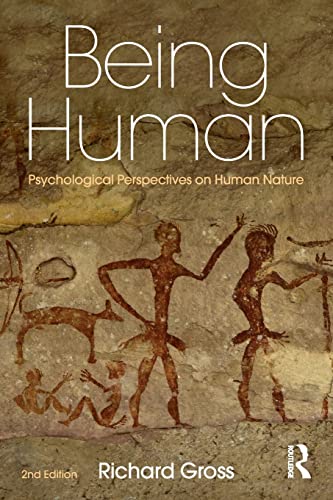 Being Human
by Richard Gross

Being Human: Psychological Perspectives on Human Nature by Richard Gross

While there may be no one single characteristic that differentiates humans as a species, it is the combination of differences from other species that makes us unique. The new edition of Being Human examines the psychology of being human through exploring different psychological traditions alongside philosophy and evolutionary theory, covering themes such as culture, cognition, language, morality, and society.

Our nature - or `essence' - is something that has preoccupied human beings throughout our history, beginning with philosophy and religion, and continuing through the biological, social, and psychological sciences. Being Human begins by describing some of the major philosophical accounts of human nature, from Ancient Greek philosophers, such as Plato and Aristotle, to major British and Continental philosophers, such as Locke and Nietzsche. The book considers religious accounts of human nature, with their focus on the nature of good and evil, and scientific accounts of genetics and the brain, which underpin the distinctively human cognitive ability of language. Attention then turns to the ideas of the behaviourists, such as Skinner, Freud, and other psychodynamic psychologists, and humanistic-phenomenological psychologists, such as Maslow. Finally, human culture is discussed as the ultimate defining characteristic of human beings: culture represents our `natural habitat' and what defines us as a species.

This updated second edition includes increased coverage of social psychology and has a broader scope, in order to identify the defining characteristics of human beings. With reference to current psychological research and philosophical material, this is fascinating reading for students of psychology, philosophy, and the social sciences.

Richard Gross has been writing psychology texts for both undergraduate and A-level students for over 30 years. He has a particular interest in philosophical aspects of psychology, including what it means to be a human being.

GOR010244476
Being Human: Psychological Perspectives on Human Nature by Richard Gross
Richard Gross
Used - Very Good
Paperback
Taylor & Francis Ltd
2019-03-27
234
0367150980
9780367150983
N/A
Book picture is for illustrative purposes only, actual binding, cover or edition may vary.
This is a used book - there is no escaping the fact it has been read by someone else and it will show signs of wear and previous use. Overall we expect it to be in very good condition, but if you are not entirely satisfied please get in touch with us.