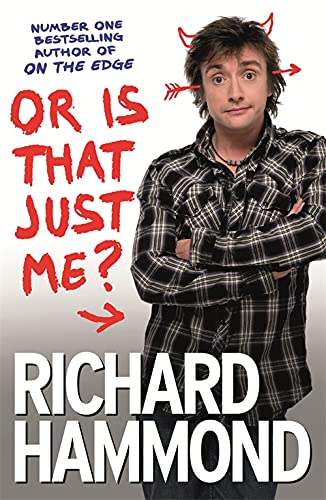 Or Is That Just Me?
by Richard Hammond

Used Price
$13.99
inc. GST
Free Shipping in Australia
More antics from the much-loved TOP GEAR presenter, and the No.1 bestselling author of ON THE EDGE.
Reviews:
Trustpilot
Very Good

Or Is That Just Me? Summary

Or Is That Just Me? by Richard Hammond

More antics from the much-loved TOP GEAR presenter, and the No.1 bestselling author of ON THE EDGE.

"There is, I discovered, a technique to performing a low-rent, comedy motorcycle jump with a bad hip joint following a low-speed fall off a horse on to your wife's Land Rover keys..."

More of the wry, honest and often hilarious chronicles of Richard Hammond - TV presenter, adventurer and general drawer of the Short Straw. Continuing where AS YOU DO left off, OR IS THAT JUST ME? focuses on just a few of the many hair-raising stunts, expeditions and encounters experienced by Richard Hammond over the last eventful year.

Customer Reviews - Or Is That Just Me?

Or Is That Just Me? Reviews

an enjoyable read but also reveals a sensitive side to the Hamster's personality * CATHOLIC HERALD *
often funny and always self-deprecating, describing in detail how a supposedly glamorous life behind the camera is often beset by pratfalls and indignities * HUDDERSFIELD DAILY EXAMINER *

Richard Hammond is internationally famous for co-presenting TOP GEAR and subsequently THE GRAND TOUR with Jeremy Clarkson and James May. He has produced and presented documentaries for BBC One, examining the lives of two of his heroes, Sir Stirling Moss and Evel Knievel. He is the author of a number of bestselling books including ON THE EDGE, AS YOU DO, and IS IT JUST ME? Richard is married to Mindy and has two daughters, Izzy and Willow. He shares his garage with a vast and ever-changing collection of motorcycles both vintage and current. Follow Richard Hammond on Twitter @RichardHammond and visit his website at www.thehamsterscage.co.uk