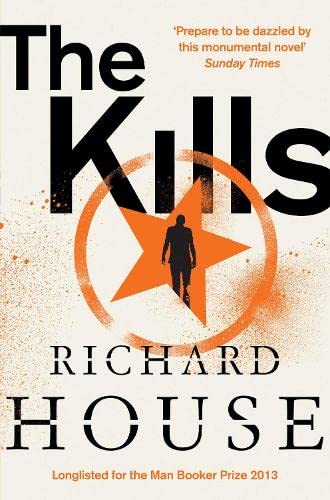 The Kills by Richard House

An astonishing landmark novel in four books, The Kills is both a political thriller and a bravura literary performance. Longlisted for the 2013 Man Booker Prize.

The Kills by Richard House

Longlisted for the Man Booker Prize 2013.

This is The Kills: Sutler, The Massive, The Kill, The Hit.

The Kills is an epic novel of crime and conspiracy told in four books.

It begins with a man on the run and ends with a burned body.

Moving across continents, characters and genres, there will be no more ambitious or exciting novel in 2013.

In a ground-breaking collaboration between author and publisher, Richard House has also created multimedia content that takes you beyond the boundaries of the book and into the characters' lives outside its pages. This material and much more can be found on http://www.thekills.co.uk.

Camp Liberty is an unmanned staging-post in Amrah province, Iraq; the place where the detritus of the war is buried, incinerated, removed from memory. Until, suddenly, plans are announced to transform it into the largest military base in the country, codenamed the Massive, with a post-war strategy to convert the site for civilian use.

Contracted by HOSCO, the insidious company responsible for overseeing the Massive, Rem Gunnerson finds himself unwittingly commanding a disparate group of economic mercenaries at Camp Liberty when the mysterious Stephen Lawrence Sutler arrives. As the men are played against each other by HOSCO the situation grows increasingly tense. And then everything changes. An explosion. An attack on a regional government office. When the dust settles it emerges that Sutler has disappeared, and over fifty million dollars of reconstruction funds are missing.

Sutler finds himself accused and on the run. Gunnerson and his men want revenge for months of abuse and misinformation. Out of the chaos a man named Paul Geezler rises to restore order, a man more involved than he's willing to admit.

And then there's the vicious murder of an American student in Italy. A murder that replicates exactly the details of a well-known novel.

Richard House is an author, film maker, artist and university lecturer. As well as the digital-first novel The Kills, he has written two previous novels (Bruiser and Uninvited), which were published by Serpent's Tail in the 1990s. He is a member of the Chicago-based collaborative Haha. He is the editor of a digital magazine, Fatboy Review: www.fatboyreview.net
GOR006165739
The Kills by Richard House
Richard House
Used - Very Good
Paperback
Pan Macmillan
2013-07-18
1024
1447249941
9781447249948
Short-listed for The Gordon Burn Prize 2014 (UK) Long-listed for Man Booker Prize 2013 (UK) Long-listed for Green Carnation Prize 2013 (UK)
Book picture is for illustrative purposes only, actual binding, cover or edition may vary.
This is a used book - there is no escaping the fact it has been read by someone else and it will show signs of wear and previous use. Overall we expect it to be in very good condition, but if you are not entirely satisfied please get in touch with us
Trustpilot