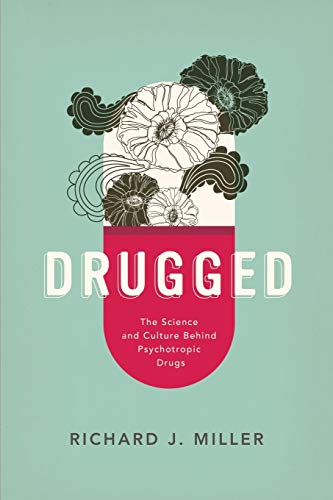 Out of Stock
$33.99
inc. GST
Through the eyes of history, science, and culture, this exciting new book reveals the world behind psychotropic drugs, answering many important, but tricky, questions about where they come from, exactly what they are and how they work.
Like New
Only 0 left

Drugged: The Science and Culture Behind Psychotropic Drugs by Richard J. Miller

"Morphine," writes Richard J. Miller, "is the most significant chemical substance mankind has ever encountered." So ancient that remains of poppies have been found in Neolithic tombs, it is the most effective drug ever discovered for treating pain. "Whatever advances are made in medicine," Miller adds, "nothing could really be more important than that." And yet, when it comes to mind-altering substances, morphine is only a cc or two in a vast river that flows through human civilization, ranging LSD to a morning cup of tea. In DRUGGED, Miller takes readers on an eye-opening tour of psychotropic drugs, describing the various kinds, how they were discovered and developed, and how they have played multiple roles in virtually every culture. The vast scope of chemicals that cross the blood-brain barrier boggle the very brain they reach: cannabis and cocaine, antipsychotics and antidepressants, alcohol, amphetamines, and Ecstasy-and much more. Literate and wide-ranging, Miller weaves together science and history, telling the story of the undercover theft of 20,000 tea plants from China by a British spy, for example, the European discovery of coffee and chocolate, and how James Wolfgang von Goethe, the famous man of letters, first isolated the alkaloid we now know as caffeine. Miller explains what scientists know-and don't-about the impact of each drug on the brain, down to the details of neurotransmitters and their receptors. He clarifies the differences between morphine and heroin, mescaline and LSD, and other similar substances. Drugged brims with surprises, revealing the fact that antidepressant drugs evolved from the rocket fuel that shot V2 rockets into London during World War II, highlighting the role of hallucinogens in the history of religion, and asking whether Prozac can help depressed cats. Entertaining and authoritative, Drugged is a truly fascinating book.

Drugged is an amazingly well researched book that takes the reader through the history and social impact of psychotropic drugs throughout human history...I would recommend this book to anyone. * Helen Stamp, The Biologist *
I've read virtually all the books for the general public on psychoactive drugs. None come close to Miller's volume in breadth, depth, engagement and accessibility. He recounts the stories of all the principal drugs with a flair that is engaging as a novel. From morphine to marijuana the history, chemistry, pharmacology and societal roles of every agent are chronicled with comparable emphasis on cultural roles as on brain actions. A must read both for the lay public and professionals. * Solomon H. Snyder, MD, Department of Neuroscience, Johns Hopkins Medical School, Baltimore, MD *
Drugged: The Science and Culture Behind Psychotropic Drugs is a tour de force by Professor Richard J. Miller of Northwestern University. This book makes a powerful case that to deeply understand drug effects on the brain, one needs to understand how the emergence of these drugs in both ancient and modern cultures have shaped and continue to shape human culture; from the emergence of religion over 11,000 years ago to our Prozac nation" and "Rave" cultures... [and] is all the more engaging for the personal reflections and the evident sense of humor of its author. I recommend it highly to people interested in both the scientific and social contexts of psychopharmacology. * John H. Krystal, MD, Robert L. McNeil, Jr., Professor of Translational Research, Chair, Department of Psychiatry, Yale University School of Medicine and Chief of Psychiatry, Yale-New Haven Hospital, New Haven, CT *
Finally, psychotropic drugs, the drugs which speak loudest to our minds and hearts, have found the voice that provides the basis for understanding how these miraculous, misunderstood, and often misused and maligned substances, came to be discovered, how they achieve their magic, and how they have shaped society and vice versa. Miller's breathtaking knowledge of pharmacology, history, literature ,and social mores, leavened by a great talent for writing readable prose, is awesome, enabling him to produce a book that will enlighten, delight, inspire, amuse, appall, and humble everyone from professors of neuropharmacology to the consumers of Prozac, Valium, Risperdal, lithium, meth, 'special k' and coke. * Herb Meltzer, Professor of Psychiatry and Behavioral Sciences, Northwestern Feinberg School of Medicine, Chicago, IL *
Miller casts his net [wide]..., covering everything from tea and coffee to LSD (lysergic acid diethylamide) and Prozac (fluoxetine hydrochloride), and not limiting himself geographically. He also makes lengthy and lively excursions into culture. * Nature *
Indeed, the connections Miller makes between the arts and the science of our brains on drugs are some of the most delightful bits in Drugged. Even if you can't bear the chemical compounds, you can take pleasure in the 19th-century paintings. * The Daily Beast *
When presenting the vignettes associated with any particular drug as well as the drug's proponents, developers, and detractors, the book is at its best. The stories are interesting, well written, and historically engaging often presenting facts unknown even to those in the field of brain chemistry. * New York Journal of Books *
[Miller] is literate in a way that we hope all scientists to be, and his account is not only engaging ... but also scientifically rigorous. * Irish Times *
Drugged is not a typical work on psychotropic drugs. The book blends historical and current research in an engaging style more common in popular works than in historical scientific writing. Drugged should be part of the library of virtually anyone who is employed in the alcohol and drug use/abuse industry. [... I]t will also make interesting reading for general readers along with students and professionals in numerous disciplines. Highly recommended. All readership levels. * CHOICE *
[Miller's] enjoyment of the subject is palpable, and the result is a lovely book full of not only facts but also inspirational stories. * PsycCRITIQUES *

Richard Miller is Alfred Newton Richards Professor of Pharmacology at Northwestern University. He has authored or co-authored more than 400 papers and journal articles on molecular pharmacology and biological chemistry.

GOR010389878
Drugged: The Science and Culture Behind Psychotropic Drugs by Richard J. Miller
Richard J. Miller
Used - Like New
Paperback
Oxford University Press Inc
2015-03-12
384
0190235950
9780190235956
N/A
Book picture is for illustrative purposes only, actual binding, cover or edition may vary.
The book has been read, but looks new. The book cover has no visible wear, and the dust jacket is included if applicable. No missing or damaged pages, no tears, possible very minimal creasing, no underlining or highlighting of text, and no writing in the margins.